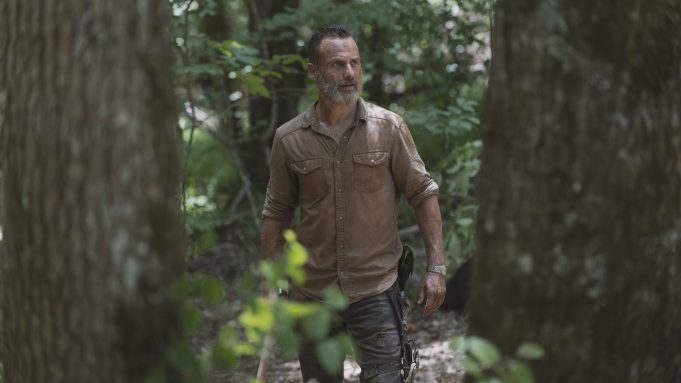 SPOILER ALERT: Do not keep reading if you have not seen Episode 4 of Season 9 of “The Walking Dead,” titled “The Obliged”

The episode begins with Michonne (Danai Gurira). She is working dilligently on crafting the charter she wants to institute between the communities while also helping to raise Judith. But she still feels the need to sneak out at night and use her trusty katana to dispose of a few walkers. On one such outing, she gets distracted and, after a walker gets a hold of her, drops her sword. She is forced to use the closest available weapon, which happens to be a baseball bat. With the walker dead, Michonne has an uncomfortable moment as she holds the bat, no doubt bringing up memories of Negan (Jeffrey Dean Morgan).

At Hilltop, Maggie (Lauren Cohan) is back from the bridge camp but is preparing to head out again immediately. She briefly speaks with Jesus (Tom Payne), who correctly deduces that Maggie is planning to go to Alexandria and kill Negan as she and Daryl (Norman Reedus) discussed at the end of last week’s episode. He tells her that Rick was wrong to unilaterally make the decision to spare Negan, but he wants to make sure Maggie is not also making a mistake in killing him now. Nevertheless, she persists.

At the bridge, Rick consults with Eugene (Josh McDermitt) as it appears a levy upriver has broken and risks destroying the whole project. Eugene does have a small bit of good news, in that two walker herds that the group has been tracking have not merged into one massive herd, which would overwhelm their defenses.

Rick then meets with Carol (Melissa McBride), who tells him that she plans to head back to the Kingdom. She previously dispatched Alden (Callan McAuliffe) to overtake the Saviors who left the construction site to convince them to come back, but Carol says the group must be willing and able to stand on their own. If their alliance with Rick and company falls apart, then so be it. Rick is distraught, but tells Carol that she is the shining example of how things can turn out for the better.

Jerry (Cooper Andrews) then arrives at the bridge, bearing a message from Jesus for Rick. He tells Rick that Maggie is bound for Alexandria, with Rick quickly realizing that she plans to kill Negan. Rick relays a message to stop Maggie at Alexandria’s gates to a nearby watch post, but the girl standing guard doesn’t pass the message along as Rick requests. Rick then prepares to head back to Alexandria to stop Maggie himself, with Daryl offering Rick a ride on his motorcycle to get their faster.

On the road, Daryl doesn’t take the turn for Alexandria and Rick realizes something is wrong. He makes Daryl pull over and the two begin to argue, with Daryl telling Rick that it is time for Negan to die like he should have at the end of the war. The arguments turns physical, with the pair tumbling down a nearby hill into an open hole nearby.

Back in Alexandria, Michonne is informed that Negan is refusing to eat down in his cell. She goes down to see him, with Negan saying he will eat so long as Michonne stays to speak with him. She reluctantly agrees to do so. He mocks her for staying behind at Alexandria and playing house with Judith and Rick. He says she is a warrior who is meant to be fighting. She fights back, saying her efforts are helping to rebuild the world. Negan then goes into a story about his wife, revealing to Michonne that she died of cancer. He is happy she died when she did, though, saying she was too weak to survive in the new world. He also tells Michonne she is secretly happy her own child died, as the child would have only slowed her down and made her weak. She storms out in anger, but not before dumping Negan’s food on the floor.

She eventually relents and returns. Negan tells her that she and he are the same and it is driving her mad. Before she leaves him again, he asks her what has happened to Lucille, his barbed wire bat. She laughs and says it was left out to rot, which devastates him.

Rick and Daryl try to get out of the hole, but to no avail. Daryl lays into Rick for letting Negan live, given how many people he has killed, reminding Rick that he wouldn’t be alive today if not for Glenn. He also tells Rick that Maggie simply couldn’t live with the thought of Negan being alive anymore, just like Oceanside. Rick quickly realizes that Oceanside has been killing the Saviors who have gone missing. He tells Daryl that Negan will become a martyr to any Saviors who still wish to see him in power, and that all they have done since the war will have been for nothing. Daryl hits Rick hard when he says that he would die for Rick or for Carl, but that Rick is chasing a foolish dream to believe the world can be united again.

We then cut to Anne (Pollyanna McIntosh) and Gabriel (Seth Gilliam) in the junk yard. Gabriel is bound in much the same way Anne previously tied up Negan. She again has a walker tied up and ready to devour him, but Gabriel manages to talk her down. Rather than let him die, she forces him to breathe in some kind of chemical soaked into a rag, causing him to lose consciousness. When he wakes up later on, she has left a note saying she must go on alone.

Carol and the remaining people at the bridge camp are preparing to leave when suddenly Jed (Rhys Coiro) and the other Saviors emerge from the woods. Jed is carrying a gun, which he says he took from Alden. He tells Carol he has figured out that Oceanside has been killing the Saviors and demands she step aside, no doubt so he and his people can raid the weapons cache at the camp. Carol lowers her gun, but when Jed steps in close, she strikes.

Rick and Daryl hear the shots, with Rick saying they will draw the walker herds. He and Daryl finally work together, getting out of the hole while dodging walkers falling in on top of them. Once they are free, they see one of the herds approaching. Rick grabs a horse that ran from the camp and says he will lead the herd away from the bridge.

He rides off but a short way down the road, he sees the other herd approaching. His horse gets spooked, and Rick falls off. He lands on a piece of rebar laying near the side of the road, skewering him through the abdomen. He loses consciousness as the herds converge on him.