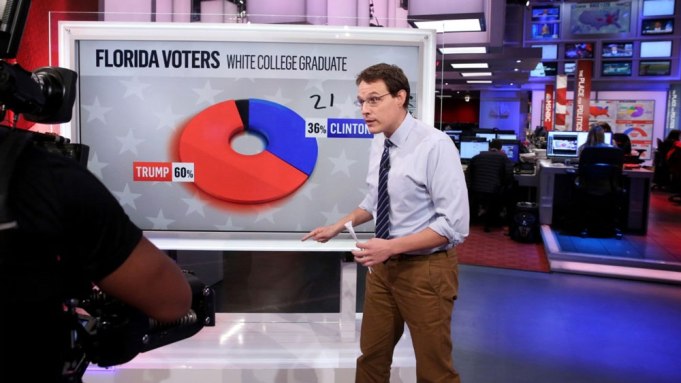 MSNBC viewers know they can watch Stephanie Ruhle each weekday during daytime hours. But on Election Night, the anchor will show up at night on what may be an unexpected video perch.

Ruhle, best known for doing two hours a day on the NBCUniversal cable network, will do another hour on Tuesday, November 6, at 7 a.m. in a relatively new venue for NBC News. Her early-evening show, meant to serve a sort of preview to NBC News’ main primetime coverage on its broadcast network, will stream on Signal, the news division’s new streaming outlet. “We do have a lot of digital plays that are new for this season,” says Rashida Jones, senior vice president of specials at NBC News and MSNBC, who also oversees the new broadband effort. Ruhle, she says, “will do her live show with the same energy she brings to you every day on cable.”

In years past, digital coverage of elections was considered something that was nice to have. Now it’s becoming a critical piece of the occasion. All the big U.S. news outlets are rolling out offerings meant to appeal to a growing audience that turns first to smartphones and tablets when news breaks.

“You can literally follow everything all day long – all night long – on your phone, or turn to your Roku or your Amazon,” says Mary Hager, the “Face The Nation” executive producer who is overseeing CBS News’ election coverage. “There are so many ways that we traditionally in the past have not been able to cover campaigns. Now we will be all over the place.”

The networks have little choice. Mobile video was once seen as something largely embraced by younger consumers, but even mature news aficionados have taken to the technology. According to a 2017 study by the Pew Research Center, about 85% of U.S. adults get news on a mobile device, compared with 72% in 2016 and 54% in 2013. Pew says the surge comes from older people. Approximately two-thirds of Americans 65 and older get news via mobile devices – 24 percentage points more than in 2017 and nearly three times the share seen in 2013, when Pew says less than a quarter of people 65 and older got news on mobile.

News personnel believe the average consumer’s interest in the event is intense – and has become even more so with news in recent weeks around President Trump’s stance on immigration and the confirmation of Supreme Court Justice Brett Kavanaugh (another event that spurred the networks to pre-empt hours of regular programming). “I do think that these midterm elections are more important than ever – and it’s not just my opinion,” says Norah O’Donnell, the co-anchor of “CBS This Morning” who is known for her coverage of politics. “The voter interest is at all all-time high.”

Little surprise, then, that all the broadcast networks have expanded what was expected to be two hours of primetime coverage of results into three. Those broadcasts will be augmented by streaming-video newscasts that start earlier in the day. ABC News Live, ABC News’ digital entry, starts coverage at 4:30 p.m. CBSN, the CBS News streaming video hub, commences at 5 p.m. CNN’s Facebook Watch program, “Anderson Cooper Full Circle,” will air a special show focused on the election with the latest breaking news updates and developments live at 6:25 p.m.

Cable viewers can expect wall-to-wall coverage. Fox News plans to cover election build-up on Tuesday on programs like “Outnumbered” and “The Five,”and will make a live-stream of its TV coverage available between 7 p.m. and 9 p.m. eastern. CNN, meanwhile, will make its election night coverage – 5 p.m. on Tuesday to 9 a.m. on Wednesday – available via streaming video on its homepage and via certain mobile apps to consumers without requiring a cable subscription. MSNBC says its work on Election Day starts with its “Morning Joe” at 6 a.m.

In other cases, the midterms lend opportunity to draw attention to digital extras and new efforts. Fox News Channel will hold an interactive viewing party on “Fox Square,” the plaza directly outside of the network headquarters on New York City’s Avenue of the Americas, where fans can watch coverage. From 9 a.m. to 9 p.m. there, the 21st Century Fox-owned cable-news outlet will offer the crowd a chance to get a sneak peek of Fox Nation, the new subscription-based video-on-demand service slated to launch later in the month.

MSNBC is touting a re-launched version of Steve Kornacki’s interactive “Big Board,” while CNN has tapped Harry Enten to lead viewers to a new forecasting feature that lets digital users input their Zip Code to discover maps, data and more.

ABC News will use its midterms coverage to experiment further with use of augmented reality graphics. The Disney-owned outlet plans to impost a three-dimensional Capitol and seats within the House and Senate chambers to display real-time data in a way that it expects to draw viewer attention. “Augmented reality gives us a unique way of displaying editorial information that’s dynamic and engaging,” says Hal Aronow-Theil, creative director at ABC News. “While the overall process is very complex and requires a lot of preparation and choreography than regular graphics production, the end result is worth the effort. There’s great potential for creative interactive storytelling to help the viewer better understand complex information.”

ABC News has tried the technology previously on “Good Morning America,” when it was able to show a three-dimensional heart on screen with which correspondent Dr. Jen Ashton could interact. Disney’s ESPN and independent The Weather Channel have also made use of similar techniques.

And some of the networks are building other franchises. With little fanfare, CNN political columnist Chris Cillizza has quietly launched a YouTube program based on his “The Point” column. CNN’s CNN Politics vertical has also launched a new column by senior political reporter Nia Malika-Henderson.

The network sees the midterms as crucial to its planning for the future, says Rachel Smolkin, vice president and executive editor for CNN Politics. “In many ways the midterms set us up for 2020 and the next presidential cycle,” she says. “We are looking to what is useful for our audience and how they are interacting with content in different ways.”