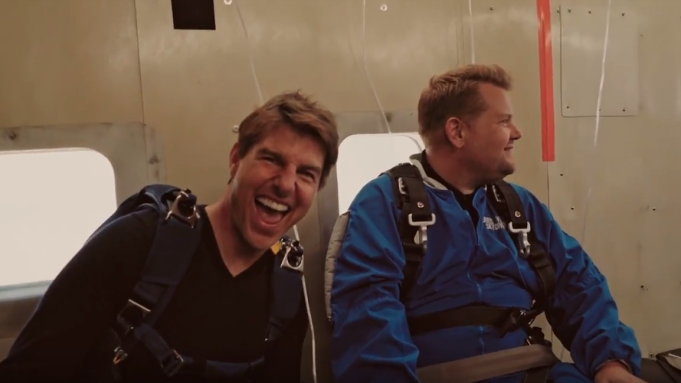 The mission: skydive from 15,000 feet in the air with Tom Cruise. Level of terror induced in James Corden from the task? 11 out of 10.

On a 110 degree day in Perris Valley, Calif., James Corden took to the sky with “Mission Impossible — Fallout” star Tom Cruise to attempt to “jump out of an aeroplane,” as the talk show host described, for a “Late Late Show” segment.

In the clip, Corden repeatedly expresses his disbelief that he is actually completing the stunt. After greeting one another, Cruise jokes how “I’m just so impressed that James is going skydiving. I mean, between you and me, I was half expecting him to text me and tell me he was canceling.”

The video then cuts to Corden explaining how his attempts to back out of the bit failed. “I’ve actually been trying to get a hold of Tom for the last couple of days to cancel, but apparently I had his number saved wrong in my phone. So, I’d also like to take this time to apologize to Tom Hiddleston for all the messages I sent him about my case of food poisoning.”

After training on how to arch during the freefall, which, according to the “Cats” star, made him “feel like a rumba” rolling around on the ground, Corden taught Cruise the “big box, little box, cardboard box” dance routine — which he previously taught “Carpool Karaoke” participant Justin Bieber — before heading up into the air.

In between stretches mid-flight, Corden told Cruise: “You know, next time you come on the show, let’s just do a chat.” But despite a parade of expletives on Corden’s part before falling out into the air, both actors made it through their skydiving adventure unscathed, all scored to the “Mission Impossible” theme.

Watch the clip from tonight’s “The Late Late Show with James Corden” above.