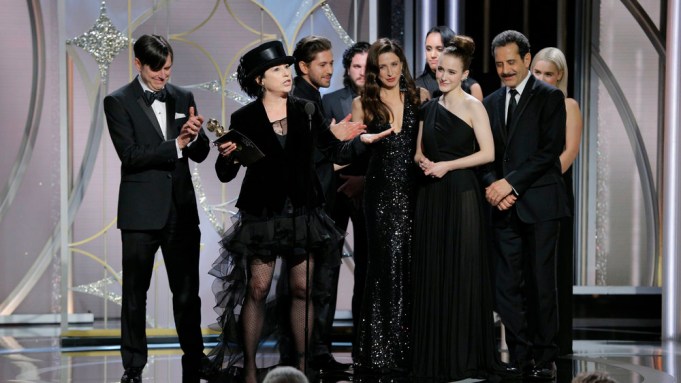 Amy Sherman-Palladino thanked her crew, Amazon — “every check cleared” — her “murderers’ row” of actors including Mrs. Maisel herself Rachel Brosnahan, the “half human half talking character.” She then promptly wondered if there was cheese backstage and headed off.

The Globe win marked the first big kudos recognition for the Sherman-Palladino and Palladino, the married couple who have worked together for years on critically acclaimed series such as “Gilmore Girls” and “Bunheads.” But they’ve never had a show with kudos traction like “Mrs. Maisel.”

“The great thing about awards is it makes the people who are investing in your show feel like their money has been well spent,” Sherman-Palladino observed. “That is very important.”

“Mrs. Maisel” has been a whirlwind experience for all involved as the show generated strong critical buzz from the moment the episodes dropped in late November.

“We don’t know if anyone’s going to watch this,” Sherman-Palladino said. “We only do what we like. To know that it has gone bigger and farther out there is a really, really great. With ‘Gilmore’ it took a long time. This one shot out of the cannon fast and quick.”

“Mrs. Maisel,” the latest effort from “Gilmore Girls” creators Amy Sherman-Palladino and Dan Palladino, chronicles the journey of a ’50s-era wife and mother (Rachel Brosnahan), who suddenly finds herself thrust onto the stand-up comedy scene after her husband leaves her. It also earned a nod from the Hollywood Foreign Press Association for its star, Brosnahan.

Critics praised the series, with Variety‘s Maureen Ryan writing, “‘Mrs. Maisel’ bristles with an energetic sense of discovery, and Rachel Brosnahan is flat-out fantastic in the title role.” Amazon has already ordered a second season, as part of a two-season deal for the series.

The win continues a six-year streak of first-time nominees taking the prize, following FX’s “Atlanta,” Amazon’s “Mozart In the Jungle” (a first-time nominee in its second season) and “Transparent,” Fox’s “Brooklyn Nine-Nine,” and HBO’s “Girls.”