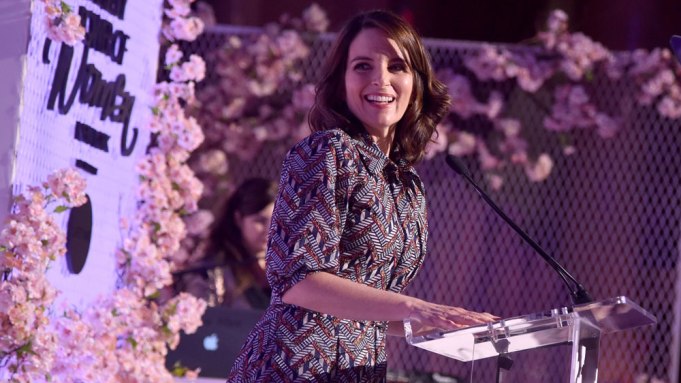 In her speech at Variety‘s Power of Women luncheon on Friday, Tina Fey discussed the significance of women helping women.

Fey credits all the women she’s worked with for her success.

“My whole life is just ride-or-die bitches as far as the eye can see,” she said.

She says the word bitch is a compliment, quoting the titular heroine in “Unbreakable Kimmy Schmidt,” the Netflix series she co-created and co-executive produces.

“The community of women that I work with have always inspired me to do better,” she said. “To be the best I can be, if not better.”

She said it is for that reason that she makes an effort to hire women.

“I made a vow to myself to not accept that privilege of being the only woman in the room…to use any power I had to create opportunity for others,” Fey added.

Fey was honored for her support of Reading Is Fundamental, the nation’s leading literacy nonprofit since 1966. The organization, which was founded by Margaret McNamara (former secretary of defense Robert S. McNamara’s wife), has distributed 415 million books to more than 40 million children across the country and enlisted a million volunteers to bolster literacy rates.

“In these crazy times, when there’s so, so much going on and there are genuinely urgent new causes every day, I also want to make sure that we go back and continue to support organization like Reading Is Fundamental who have been doing incredible work for decades and not let them fall fallow,” Fey continued.

She also stressed the power of reading.

“Reading is power. Reading is access. Reading is the foundation for everything,” she said. “Every child should be able to read.”

She closed her speech by encouraging everyone to donate to the org, under any name — whether that be their favorite children’s book author or Vice President Mike Pence.

For the famed “Saturday Night Live” and “30 Rock” star, the cause hits close to home, as she remembers being read to every night growing up.

“My dad would work and come home, and that would be daddy-daughter time,” Fey told Variety for one of this week’s cover stories. “I remember him reading me ‘A Christmas Carol’ when I was in the second grade. And my teachers in school being like, ‘You’re reading this?’ He was like, ‘You can understand this.'”

She also discussed spending the last five years writing the “Mean Girls” musical for Broadway and offered her thoughts on the recent women’s empowerment movement, saying, “I think it’s long overdue. I’d like to believe from here on out, this gives people a point of reference. I actually think Time’s Up is a very good name. It’s sort of saying, ‘I know we used to do it this way, but from now on we’re not.'”

As a prominent show creator and current executive producer of “Unbreakable Kimmy Schmidt,” one of Fey’s missions has been to hire people from diverse backgrounds. “I think in comedy rooms, especially, women are treated like expensive cappuccino machines,” she says. “Where it’s like, ‘We have one. Why would we have two?!’ That’s too much pressure on that one person — to carry that, to be the African-American writer, the female writer. It’s always about changing the chemistry of the room. The more diverse the room is, it automatically becomes better.”