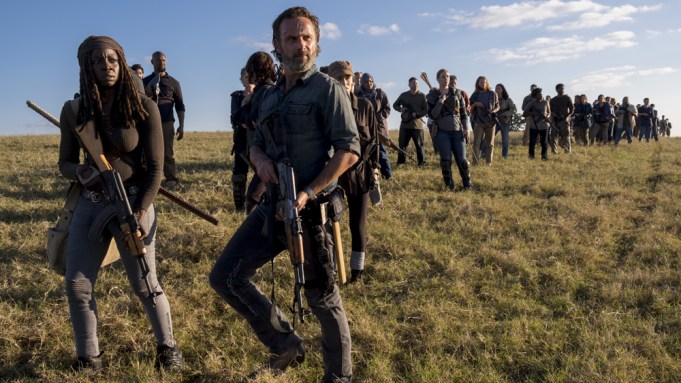 The long-running AMC zombie series showed off the first official trailer for its upcoming ninth season on Friday.

The trailer debuted at “The Walking Dead’s” Comic-Con panel following the “Fear the Walking Dead” presentation, which featured its own trailer for the upcoming season. AMC also announced the new season’s premiere date: Oct. 7 at 9 p.m.

Season 9 picks up after the conclusion of the all-out war the survivors waged against Negan and his Saviors, focusing on Andrew Lincoln’s character, Rick Grimes, picking up the pieces and putting together the utopian society for a post-apocalyptic world. The footage featured Grimes and the rest of the survivors assembling infrastructure in their new society, as well as conversations with an imprisoned Negan. The trailer also showed tensions running high as supposedly reformed saviors clash with other survivors in disputes about how their new civilization should function and treat one another.

The walkers still remain an ever-present threat, as the trailer also contained cuts of Grimes and company fighting off the undead onslaught.

Lincoln also confirmed at the panel that he will leave the show this next season after leading it since its start in 2010.