‘The Walking Dead’s’ Jeffrey Dean Morgan and Norman Reedus on Andrew Lincoln’s Exit: ‘He Is the Leader of This Show’ 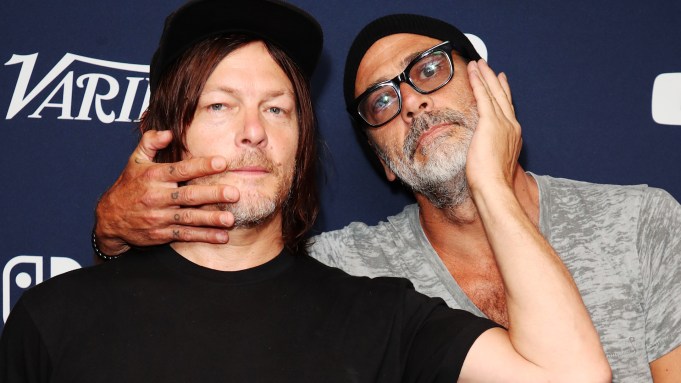 “He’s like a true No. 1 on that call sheet,” Morgan said. “He is the leader of this show and everyone kind of follows his lead and he leads with his heart, and that’s a very rare quality.”

Lincoln, who plays Rick Grimes on “The Walking Dead,” confirmed his departure after season 9 of the series at Comic-Con Friday.

“This show really is a family,” Morgan continued, “and I think a lot of that has to do with Andy…Andy has always been the guy, and the show is going to miss him, we’re going to miss him. It’s going to be a different vibe, there’s no replacing him.”

“I hate that guy,” Reedus joked, adding that he and Lincoln have shared a trailer for nine years.

Reedus, who plays Daryl Dixon, went on to detail he and Lincoln’s production ritual: “He’s the first call I get when I wake up. He calls me, we talk about the day as we’re driving to work, we get to work, talk about the day, at lunch he’s in my trailer, and then we wrap and he calls me on the way home. It’s been like that every day.”

Lincoln has been with the show since the first episode, with his character emerging from a coma to discover that the world has been overrun by zombies. Reedus first appeared in the show in the premiere season’s third episode.

The pair also discussed what drives their characters in the new season and how things will be different with Negan in jail.

“It’s going to be Negan kind of fighting some inner demons,” said Morgan, who portrays the polarizing character. “I think being locked up doesn’t suit him very well, which was probably Rick and everyone’s plan to begin with. Negan is having to take a good, long, hard look in the mirror and maybe not enjoying what he’s seeing.”

Reedus spoke to his character’s relationship with Lincoln’s Rick. “They fight and they disagree on things but it’s like two brothers fighting, they always will have each other’s back, but they don’t necessarily agree on everything.”

“A big part of the first half of the season is Rick’s been sort of blinded by this desire to build something in honor of his son and that’s taking him on a destructive path not only for him but for the group in Daryl’s eyes,” he continued. “A lot of that is him hearing me out, and me making sure Daryl’s point is heard.”

“It’s just nice having a different perspective,” said Morgan. “She’s been part of this Walking Dead world for seven years and now to have her kind of running the show — it seems extra collaborative this year. It’s a reboot, almost, of this show. It feels different. There’s just a different vibe, certainly for the first time I’ve been here.”