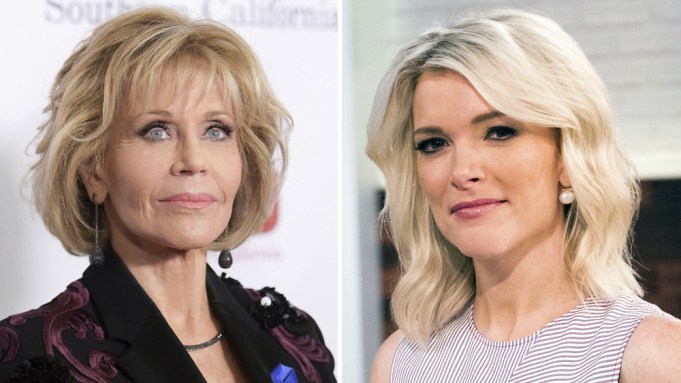 News anchor Megyn Kelly is once again in hot water over her recent comments regarding Jane Fonda, and this time those speaking out against her constant criticisms of the actress are the co-hosts of “The View.”

On Tuesday’s episode of the ABC daytime talk show, they played a clip from “Megyn Kelly Today,” in which Kelly said she does not regret asking Fonda about her plastic surgery. Using Fonda’s critique of the American military during the Vietnam war, Kelly went on to conclude that Fonda “has no business lecturing anyone on what qualifies as offensive.”

“Nor do you. Nor do you,” replied “The View” co-host Whoopi Goldberg.

Co-host Joy Behar added that “to drag the Vietnam War into a plastic surgery conversation is a real stretch.”

“Why are people more angry with Jane Fonda about the Vietnam War than Nixon and LBJ and people who lied about the war and sent boys as canon fodder to that unjust and filthy war? It amazes me how you can focus on Jane Fonda,” said Behar.

Co-host Meghan McCain, the daughter of United States Senator John McCain who is also a former prisoner of war, argued that “an actor spreading antiwar propaganda” is still a “very big deal” to many veterans. But she also acknowledged that it was wrong of Kelly to bring up the nickname “Hanoi Jane” and admitted that it is a “much more serious” matter than plastic surgery.

Ann Curry, who was on the show as a guest, also pointed out that putting one’s self in the story as Kelly has done is not what real journalists do.

Back in September, Fonda appeared on Kelly’s show to promote her new film “Our Souls at Night.” When asked about her plastic surgeries, Fonda was visibly shocked and deflected to talking about the film. During an interview with Variety at the Sundance Film Festival, Fonda said that while she has no problem appearing on Kelly’s show in the future, the plastic surgery question was “inappropriate ” and showed that Kelly is “not that good an interviewer.”

Watch the clip from “The View” below: