Everything We Know About ‘The Handmaid’s Tale’ Season 2 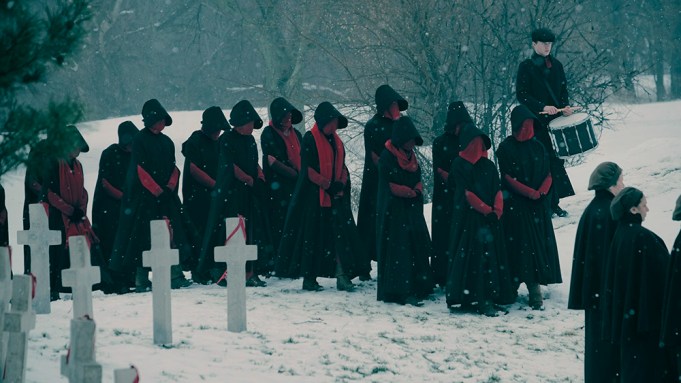 When audiences last saw Elisabeth Moss’ Offred — aka June — in “The Handmaid’s Tale,” she was being taken away from the Commander’s home in the back of a van in the Season 1 finale, her future unclear. While she questioned if she could trust Nick (Max Minghella), Moira (Samira Wiley) successfully escaped to Canada and the handmaids refused to punish Janine (Madeline Brewer) for attempting suicide.

Ahead of the show’s second season premiere April 25 on Hulu, here’s everything we know about the new season of the hit drama so far from “Handmaid’s Tale” trailer, first-look images, and early interviews.T NEWS

While the first season of “The Handmaid’s Tale” was 10 episodes in length and stuck pretty closely to Margaret Atwood’s novel of the same name, the second season will contain 13 episodes. Additionally, the story expands beyond where things left off in the book — not only in the present day of Gilead and some surrounding areas (including the Colonies and Canada), but also more flashbacks to the past to explain what events led up to the creation of Gilead in the first place. Showrunner Bruce Miller told Variety on a recent set visit that “the end of the book is so frustrating for people; part of the point of that ending is that it just leaves you hanging,” he said. “Here we do some un-hanging and the story continues. So that’s satisfying — for all of these years you think, ‘What happens next?’ And now we get to explore some of that stuff.”

Offred Is Pregnant and on the Run

Offred discovers she is pregnant with Nick’s child at the end of Season 1, and “so much of this season is about motherhood,” Moss revealed during the show’s Television Critics Association panel in January. “We’ve talked a lot about the impending birth of the child that’s growing inside of her as a bit of a ticking time bomb; the complications are really wonderful to explore. She does have the baby, but it gets taken away from her. She can’t be its mother. It makes for good drama.” After being taken from the Commander’s home, Offred is also on the run, trying to escape the life of a handmaid and the abuse she suffered at the hands of Commander Waterford and his wife, Serena.

The Story Expands to the Colonies

While the Colonies were frequently referenced in Season 1, the audience never got to actually see the place — a radioactive area of Gilead where those convicted of various crimes, known as the Unpeople, are sent. In the Season 2 trailer, the Colonies are seen for the first time — a sea of people in gray rags shoveling waste. “The way it’s described in the book is that it’s a toxic wasteland and people are just cleaning up toxic sludge — but it’s beautiful. It’s cornfields and this big expanse of land. And then you get closer and you realize there are things bubbling up,” Brewer said during the show’s PaleyFest panel in March.

Marisa Tomei, Bradley Whitford, Clea DuVall, and Cherry Jones have joined the show this season, with Tomei appearing in the second episode in some way related to the Colonies. Whitford will play Emily’s (Alexis Bledel) commander, Jones will play June’s mother, and details about DuVall’s character has not been released.

Emily and Janine Are in the Colonies

Ofglen, whose real name is Emily, ended Season 1 by being punished for her romantic relationship with a woman, being reassigned to a new commander, and attempting to escape by stealing a car before she was captured. Janine, known as Ofwarren, was the pride of Gilead after birthing a baby for her commander, but was punished shortly after when she tried to commit suicide. Both find themselves in the Colonies for Season 2 for their crimes.

Moira and Luke Are Living Together in Canada

After escaping Gilead by foot at the end of Season 1, Moira is living in Canada, dubbed “Little America,” in Season 2 alongside June’s husband Luke, as members of the resistance. O-T Fagbenle, who portrays Luke, said at PaleyFest, “Luke and Moira are living together now, trying to find a way to find common ground. They’ve been through two quite separate traumatic events, but they share a history and they share a kind of family — they’re almost brother and sister. But at the same time, it’s hard to communicate what they’re going through emotionally.” In the Season 2 trailer, the two lead protests in the streets, taking an activist roles.

Origins of Gilead Are Revealed

Miller revealed during the “Handmaid’s” TCA talk that Season 2 will dive into the social and political conflicts that led to Gilead’s creation. In particular, he said it will explore “what happened to the press as Gilead was formed” and visit The Boston Globe, along with a continuation of flashbacks to show America leading up to the revolution.

After Offred disappears with her promised child, Serena Joy (Yvonne Strahovski) is out for blood in Season 2. “For Serena this is the first time things come crashing down a little bit for her, and I think she feels a little lost,” Strahovski said at PaleyFest. “The one thing that she wants is that baby — that is her greatest survival mechanism in a world where she, too, is challenged and doesn’t have much of a voice, either. So to know she might not get that, just makes the prison walls feel like they’re coming in even more. It’s very interesting to see it become Serena’s prison for a second there.” The trailer also offers a look at Serena taking on a pro-Gilead activist role, declaring “the future of mankind depends on what we do today!”

At PaleyFest, Miller revealed that as Offred/June prepares to become a mother for the second time, the show will introduce her own mother, played by Cherry Jones. He said June was a “single child of a single mother” who thought her mom had old-fashioned ideas of feminism.

Season 2 will up the level of violence, Miller says, adding that the new episodes will dive into terrorism and being a country in transition. “We have a lot of stuff with Mayday and the other rebel groups that are fighting. There’s also the people who are fighting from Canada to make things better. What it’s like to live in a place where there’s instability and what does that instability feels like? And for the Commander, what is it like to be in control of this, going from inexperience to a big role of leadership? Americans can definitely relate,” Miller said.