‘The Exorcist’ Canceled by Fox After Two Seasons 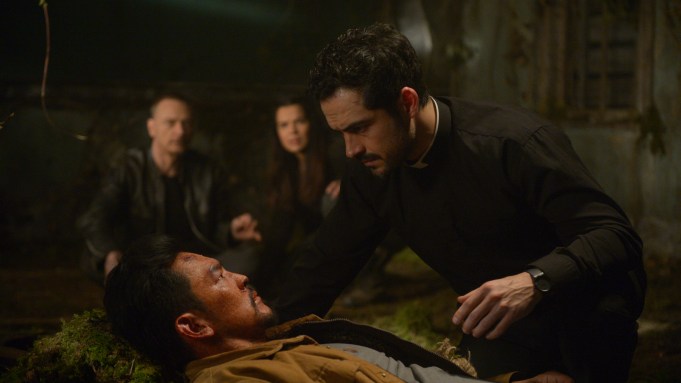 “The Exorcist” has been canceled at Fox after two seasons.

Created by Jeremy Slater, the psychological and spiritual horror drama first premiered during the 2016-17 television season but entered into a new chapter in its second season, which launched in September 2017.

The series starred Alfonso Herrera, Ben Daniel and Kurt Egyiawan. John Cho appeared in the second season as a man running a group home in which a child was targeted by a powerful demon. It came from Morgan Creek Productions in association with 20th Century Fox Television and was executive-produced by Slater, Sean Crouch, Jason Ensler, Rupert Wyatt, Roy Lee, James Robinson, David Robinson and Barbara Wall.

“The Exorcist” was Fox’s lowest-rated program this year, averaging 1.32 million total viewers and a 0.41 rating in the 18-49 demo.

The cancellation comes after Fox axed comedies “The Last Man on Earth,” “Brooklyn Nine-Nine,” and “The Mick” on Thursday and “Lucifer” earlier on Friday.

Fox previously renewed “9-1-1,” “Empire,” “Star,” “The Gifted,” “The Resident,” “The Orville” and “The Simpsons” for the 2018-19 television lineup. The network has also ordered new dramas “The Passage” and “Proven Innocent” to series, as well as a new comedy entitled “The Cool Kids.” In addition, the network has ordered a new season of Tim Allen’s “Last Man Standing,” which was cancelled at ABC last year after six seasons.