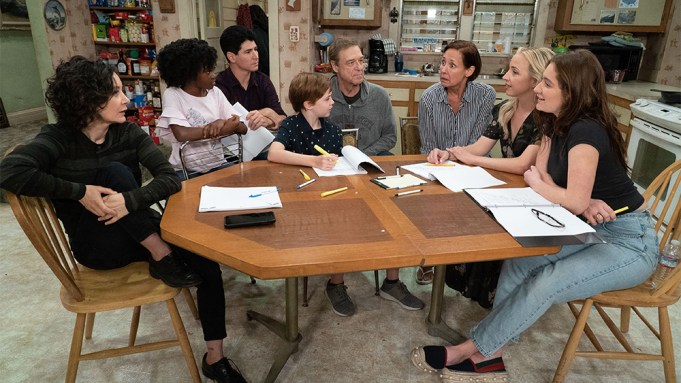 To call “The Conners” one of the fall’s most anticipated shows is less a commentary on its potential quality than describing the sensation of steeling oneself against an oncoming train. The curiosity factor and difficulty levels are high with this one; there’s not much precedent for a show emerging from the ashes of losing its titular star because she couldn’t stop tweeting racist conspiracy theories. And despite the cast and crew’s insistence otherwise, the 2018 iteration of “Roseanne” could never be just a sitcom. Roseanne Barr’s real life evolution into a right-wing hero transformed a celebrated family comedy into a cultural flashpoint to the point that President Trump felt the need to publicly congratulate Barr on its monster ratings and sticking it to the Hollywood elite from whence they both came.

So how can this cast of characters continue without the woman that anchored it for so many years? Can “The Conners” believably escape the offscreen chaos, shake the specter of Barr, and distinguish itself as its own show?

Having now seen two episodes of “The Conners,” I can report that the answer is…well, yes and no. I can’t tell you (yet) how the show writes Barr off, or much of anything significant at all. But I can say that given everything it went through to become its own series, “The Conners” makes a solid case for itself by trusting its cast to sell the hell out of a particularly tricky situation — but there is just no escaping Roseanne, or Barr, completely.

The premiere (“Just Keep Trucking”) is understandably preoccupied with explaining “Granny Rose’s” absence, making it difficult to describe without being able to get into specifics. Still, it’s safe to say that “The Conners” does its best to acknowledge the enormity of losing Roseanne even just as a character. Every other Conner — most especially Dan (John Goodman), Darlene (Sara Gilbert), and Jackie (Laurie Metcalf) — tries to figure out where they fit into the family now that Roseanne, once the glue that held them together, is gone.

The sudden nature of it all is unavoidably awkward, but the script from creators Dave Caplan, Bruce Helford, Bruce Rasmussen manages to squeeze in a surprising amount of jokes for the occasion, and the accomplished cast is more than up to the challenge of landing them. Goodman, Gilbert, Metcalf, and Lecy Goranson as Becky are particularly sharp, finding ways to let their characters’ personalities come through their fog of grief. Goodman, who very often had to take a natural backseat to Barr’s high-octane performance, gets a few great moments to be his gruff best as Dan reels from his shock and shrugs on the role of reluctant nurturer. Metcalf leans into Jackie’s signature mania and shows exactly how good she is by not letting a single line or look go by without making a meal of it. And in the two episodes screened for critics (the premiere and an episode airing further into the season), guest stars like Mary Steenbergen, Juliette Lewis, and Justin Long each bring something new and interesting to the table.

Maybe the most revealing moment, however, comes when Becky and Darlene clash on how to deal with their loss. Becky, terrified that she might come undone, insists that Darlene is better suited to take the lead. “You’re the obvious choice to take over for Mom,” she says. “You already live here, and you’re also a scary little tyrant.” Darlene doesn’t totally agree (though she of course takes “scary little tyrant” as a compliment), but Becky might as well be talking about the show itself.

When the revival first premiered in March, it quickly became clear that Gilbert’s Darlene would be as much of a lead as Roseanne herself. Her plotline of having to move back into her childhood home with two kids and no job was the most immediately dynamic, or at the very least, the basis of a sitcom setup as classic as they come. Roseanne was still the reigning matriarch, and let everyone know it every chance she got, but Darlene’s story was the one that connected everyone else’s and pushed the show forward. It’s both natural and smart that “The Conners” — both the show and fictional family — would turn the focus more squarely on her once Roseanne left the picture.

But the show can’t ignore Roseanne forever. As the sentimental premiere acknowledges and even insists, going from revolving around Roseanne to excising her completely just isn’t a realistic option. And yet it’s beyond bizarre to watch the characters remember her with fond “man, she was stubborn” chuckles knowing about the offscreen mess that made this reboot of a revival necessary. Going forward, “The Conners” will likely split the difference, mentioning her in passing while continuing to have the Conners live their lives. As it stand now, the series has a fighting chance of becoming great on its own terms — but for that, the “Roseanne” audience will have to actually care enough beyond their basic curiosity to stay tuned and find out.