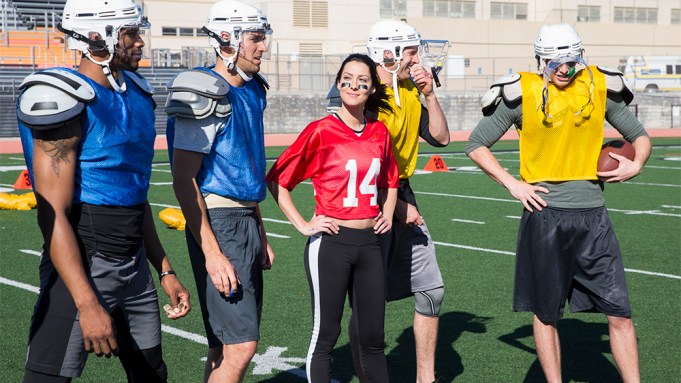 SPOILER ALERT: Do not read if you have not yet watched the June 11 episode of “The Bachelorette.”

With 18 men remaining in the running for Becca Kufrin’s final rose, Week 3 on “The Bachelorette” brought plenty of drama, some familiar “Bachelor” franchise faces and a surprising amount of bloodshed.

The new season starring Kufrin, who is the lead after she was chosen and subsequently dumped on live TV by Arie Luyendyk Jr. earlier this year, picked up this week in Los Angeles, with the contestants still calling the Bachelor mansion home.

A group date to a spa kicked off the episode, with a visit from Tia, Bekah M., Seinne, Kendall and Caroline, all of whom competed alongside Kufrin on “The Bachelor” last season. The stage was set for drama immediately, with Colton taking part on the group date after revealing that he had a previous relationship with Tia before coming onto the show. Those “Bachelor” producers never miss an opportunity to stir things up!

When the six men arrived, they learned they would be pampering the six women rather than getting pampered themselves, and they got to work painting nails and giving massages. Tia and Kufrin also sat down to discuss her relationship with Colton, and although it was revealed it wasn’t that serious, the Bachelorette continued to worry if Colton signed up for the show thinking Tia would be the one giving out the roses.

At the cocktail party, drama started between Jordan and the other men when the male model bragged about his 4,000 Tinder matches, which quickly got relayed to Kufrin. Meanwhile, Colton and the Bachelorette finally moved on from the Tia drama and he was awarded the group date rose. What a comeback story!

The week’s one-on-one, the second of the season, went to Chris — and also to Richard Marx. The unlikely trio united at Capitol Records while Marx was recording, and he helped the two to write a love song about their relationship. When they’ve had about 30 minutes of conversation, there should be lots to explore, right?

After (semi) successfully writing a tune together, the two had an intimate dinner where Chris opened up about his turbulent relationship with his father and received a rose. Marx, their seemingly eternal third wheel, turned up again at dinner to play his hit “Right Here Waiting” while the couple show danced. A ’90s dream!

Back at the mansion, David, who made quite a first impression when he turned up on the first night in a chicken suit, was carried out on a stretcher after he was found in the bedroom with his face covered in blood. While the show teased that he had gotten beaten up, it turned out he had actually just fallen out of his bunk bed and and would be spending some time in the hospital getting fixed up.

On the second group date, 10 of the men hit the football field for some training drills and a scrimmage in front of a live crowd, with Clay, an NFL player, clearly as the standout. Garrett Yrigoyen, the contestant who has faced public backlash after it was revealed he had a history of liking Instagram posts that mocked Parkland high school students, liberal women, trans people, and undocumented immigrants, also got some decent screen time for the first time since he received the first impression rose in the premiere. Dubbed “The Becca Bowl,” the game ended in a tie and Clay hurting his wrist, becoming the second guy this week to end up in an ambulance. Is “The Bachelorette” more dangerous than the NFL? Something to consider.

At the afterparty, Blake, who had the first one-on-one-date last week, admitted he was struggling with sharing time with Kufrin, and Clay reappeared with his arm in a sling to accept the group date rose.

The next day, at the week’s cocktail party, Clay revealed he would need surgery to repair his wrist before football season and, after an internal struggle, decided he needed to leave the show, giving back the rose. Kufrin was left in tears as he drove away in the limo, and she claimed she was done with the process in that moment. The episode ended before the rose ceremony, meaning Kufrin will send home this week’s castoffs at the beginning of next week.

Teasers for the next episode also showed David’s return and the show’s first dates outside of Los Angeles.