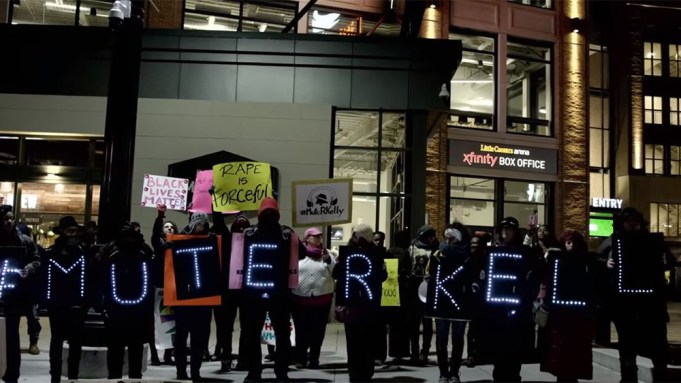 In the almost 18 months since a report was released that alleged R&B singer R. Kelly (nee Robert Sylvester Kelly) was holding young women captive as part of a sex cult, the #MeToo movement swept the nation. It first went viral in October 2017 and inspired dozens of individuals to come forward with their own stories of harassment and abuse. But as time passes and other stories get shoved into the spotlight, Kelly’s ex-wife Drea Kelly wants to ensure the public does not forget about the accusations against him.

“There was so much support, from Viola Davis to John Legend — so many people were so vocal when it was trending,” she says. “Then when it started to die down, it’s almost like, ‘OK, well that’s not the hot topic of the day, this is our lives.’ … If you’re just going to support us [while] trending, you’re not doing us any justice.”

Helping to push the story back to the forefront of people’s minds, though, is the upcoming Lifetime docuseries “Surviving R. Kelly,” which will air in three parts, and bows Jan. 3. Legend is interviewed for the project, alongside #MeToo founder Tarana Burke, Kelly herself, and Lisa Van Allen and Lizzette Martinez, who both discuss their own relationships with R. Kelly in the piece.

“Surviving R. Kelly” explores the allegations of abuse against R. Kelly, but is not designed to be part of a movement urging the singer to be held legally accountable for his alleged allegations, notes Brie Miranda Bryant, senior vice president of unscripted development and programming at the network.

“The documentary is a timeline doc that begins in 1970 and tells the story of R. Kelly and how he’s accomplished what he has,” Bryant says. “Then we pull back the layers of the stories from our participants and our survivors — that tells the story of what was happening behind the scenes.”

Bryant adds that the documentary empowers the women with the moniker of “survivor,” rather than “victim” or “accuser” because the project is about “resilience.”

“Ultimately, this story is really about them and other women who have endured what they have endured, and the millions of women across the country who are refusing to be silent,” says Bryant. “It’s about people standing together, and that’s what’s happening, especially after what happened at the screening.”

A gun threat evacuated the Dec. 4 screening event for the docuseries, after which Drea Kelly told Variety that she believed the timing of the threat was no coincidence. However, Bryant says RCA Records, R. Kelly’s long-time label, “has not seen the documentary yet.” The women behind the project say the incident made their fire “burn longer, stronger” and that it strengthened their commitment to raising awareness about their experiences.

Lifetime also wants to raise awareness and “developed a new watch guide” so viewers can organize watch parties with people in their various social media networks, says Bryant, to then start discussions about the issues raised by the documentary. “We want this to become a movement,” she continues. “We believe this matters.”

Additionally, Lifetime plans to release additional resources related to combating sexual violence on its website and social platforms to keep the conversation going.

Drea Kelly admits that there is no way of knowing if the women who are allegedly currently being held captive by R. Kelly are still alive, but she also adds that it’s a “no-brainer” they could turn to her as a resource for support.

“I understand their pain on such a deep level,” she says. “Anyone that can get out, know that they have sisters waiting for them on the other side.”

Another show of support, according Van Allen, would be to stop buying and listening to R. Kelly’s music.

“The financial backing is what is allowing him to do this to these young women,” she says. “If he didn’t have the income to do that — to move around, to have staff fly girls in … he wouldn’t be able to do this.”