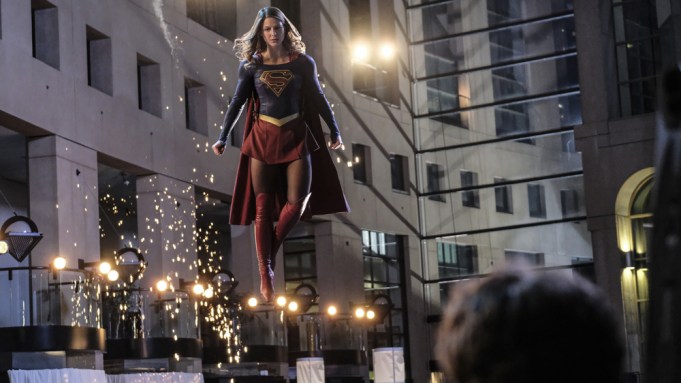 New “Arrow” showrunner Beth Schwartz joined the show’s cast onstage at Comic-Con, promising to keep the show rooted in the tone it has previously delivered as it enters its seventh season.

“I’ve been on the show since season one,” said Schwartz, who rose through the ranks from writer to executive producer and showrunner. “It’s been a long time. So it’s not a completely different show, but I’m going to put my own spin on it.”

Colton Haynes, who is returning to “Arrow” in season seven in his role as Roy Harper, praised Schwartz. “It’s the best show that’s ever been on the show since the show started,” he said.

Haynes also spoke about his character’s storyline this season.

“The good thing is Roy’s coming back,” Haynes said. “He’s not the same person.” He added, “Beth it a genius, and she wrote me a version of the character that is so special. It’s going to be hard for me to do, but I’m so excited to do it.”

During the panel for “Supergirl,” transgender actress Nicole Maines joined the show’s cast and executive producers onstage. Maines, who was featured in HBO’s “The Trans List” will join the cast of the CW action drama in season four as Nia Nal, aka Dreamer. The character is believed to be television’s first transgender superhero.

“It feels crazy, to be honest,” Maines said about her casting Saturday. “I’ve just been doing a lot of auditions lately because a lot of shows have been really eager to tell the stories of transgender people and especially transgender youth, because it’s such an important issue.”

“Nicole auditioned for us and we were completely blown away,” executive producer Jessica Queller said. She described Maines’ character, who joins CatCo as a new reporter, adding, “She’s so wide-eyed, she’s happy to be there. She has this ferocious drive to protect people and to stand up against discrimination.”

In the panel for “The Flash,” it was revealed that star Danielle Panabaker will direct an episode this season — making her the first female cast member to serve as a director on the show.

“I’m honestly so excited,” Panabaker said “It’s such a rarity to be on a show that on for 100 episodes. I’m just so grateful.”