Stevie Wonder Chokes Up About Visiting Aretha Franklin on Her Deathbed: ‘I Thought I Cried My Last Tear’ 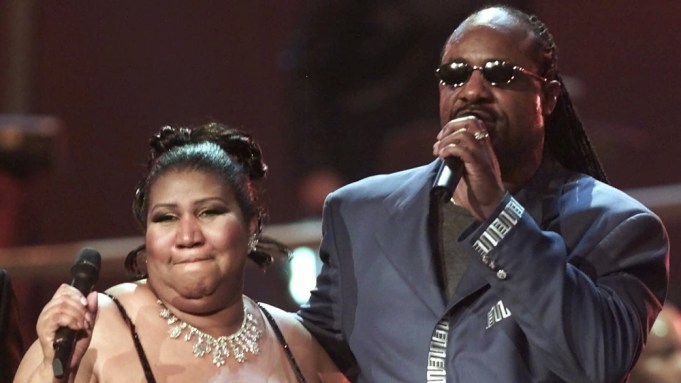 Stevie Wonder teared up during an interview on “CBS This Morning” on Friday while recalling the last words he spoke to Aretha Franklin on her deathbed. The singer-songwriter began by telling the TV news show about his plans to collaborate on new music with Franklin, who died Thursday morning.

“We talked about doing some music as recent as two months ago, and we had been talking about it,” Wonder said. “There was a song that I had written called, ‘The Future.’ And we were gonna, you know, write — you know, sing it together.”

Wonder trailed off afterward and choked up, adding, “I thought I’d cried my last tear.” He went on to recall his final interaction with Franklin leading up to her death, then stopped to compose himself again.

“I’ve got to get it together because I wanted — I did want to see her — so I decided on Monday I would go,” he continued. “I flew out from L.A. to Detroit and went to see her and spoke with her. She wasn’t able to speak back, but her family felt that she could hear me. And so I just said all the things that I’ve always said and told her to say hello to my sister.”

At the mention of his sister, who died “this year as well,” Wonder began to cry again before ending his commentary on Franklin’s death by paying tribute to her and her father, Reverend C.L. Franklin, who both impacted Wonder’s life through word and song.

“She did incredible music — incredible singer,” Wonder said of Franklin’s legacy. “She touched every genre. Every singer was influenced in some way by the way she sang. And they will forever be influenced by her because of her voice, her emotion, her sincerity is unforgettable. I remember hearing her singing at the Reverend Franklin’s church when I was little — maybe I was four or five years old — because my mother would always listen to the church services on Sunday. And so the voices I remember most in my life would be Dr. King, her voice, and her father, Reverend Franklin.”