Starz has announced series premiere dates for three upcoming originals, “Howards End,” “Vida” and “Sweetbitter” and a greenlight for a television series adaptation of the “John Wick” franchise.

The four-episode limited series “Howards End” will premiere Sunday, April 8, while both new half-hour dramas “Vida” and the adaptation of “Sweetbitter” will premiere on Sunday, May 6.

“Howards End” stars Hayley Atwell and Philippa Coulthard as two “independent and unconventional sisters seeking love and meaning” in an ever-changing world. The story based on E.M Forster’s masterpiece comes from Academy-Award winner Kenneth Lonergan, and is directed by BAFTA winner Hettie Macdonald. Matthew Macfadyen, Julia Ormond and Tracey Ullman also star in the Playground production in association with City Entertainment and KippSter Entertainment. See the key art for “Howards End” below:

“Vida” focuses on two Mexican-American sisters, Emma (Mishel Prada) and Lyn (Melissa Barrera), from the Eastside of Los Angeles who “couldn’t be more different or distanced from each other.” When circumstances force them to return to their old neighborhood, they are confronted by the past and surprising truth about their mother’s identity. “Vida” comes from executive producer and showrunner Tanya Saracho. Big Beach TV’s Robin Schwartz, Peter Saraf and Marc Turtletaub executive produce with Stephanie Langhoff. Chrisann Verges produces. Alonso Ruizpalacios directed the series premiere episode. See the first look image from “Vida” below: 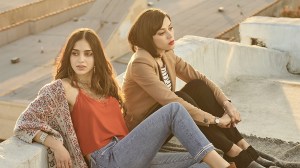 Like the novel of the same name from which it is adapted, “Sweetbitter” tells the story of Tess (Ella Purnell), a 22-year-old who arrives in New York City ready to pursue a new life and is “quickly intoxicated” by the chaotic, high-adrenaline environment behind-the-scenes of the restaurant world. “Sweetbitter” comes from Stephanie Danler, who created the show and serves as executive producer on it. Stu Zichrman serves as executive producer, showrunner, and director of the finale episode, while Richard Shepard directed the series premiere. Plan B Entertainment’s Dede Gardner, Jeremy Kleiner and Sarah Esberg also executive produce the series. See the first look image from “Sweetbitter” below: 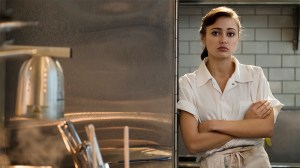 And teaming with Lionsgate, Starz is developing a television adaptation of the “John Wick” franchise. The series, currently titled, “The Continental,” will be focus on the “inner workings” of the exclusive Continental Hotel, which serves as a refuge for assassins.

Chris Collins will write the series and serve as showrunner, and the show will be executive produced by Thunder Road Pictures’ Basil Iwanyk, Chad Stahelski, Derek Kolstad, along with Collins, David Leitch and Keanu Reeves. Stahelski will direct the premiere episode.