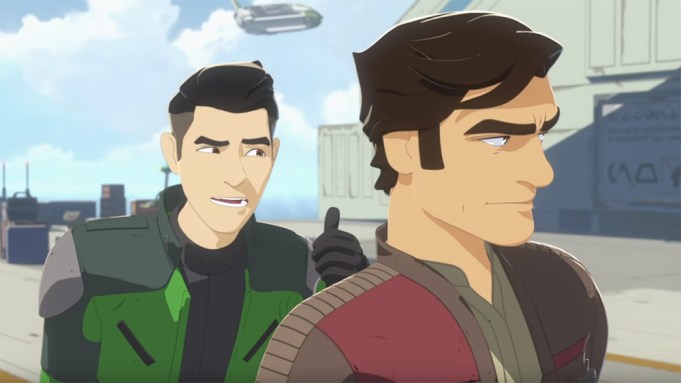 “Can you imagine what it’s like to be an ace pilot?” Kazuda Xiono (“Kaz”) asks in the new trailer for Disney Channel’s upcoming animated show “Star Wars Resistance.” The adventure series will have a one-hour premiere on Sunday, Oct. 7 at 10 p.m. ET/PT on Disney Channel, DisneyNOW, and Disney Channel VOD, with further airings on Disney XD.

Audiences will follow Kaz and some familiar “Star Wars” faces as he does just that — become a top pilot, not to mention spying on the rising threat of the First Order for the Resistance.

In the hour-long premiere, Poe and BB-8 assign Kaz to go undercover on the Colossus, a massive aircraft home to new aliens, droids, and other creatures. He makes new friends, like Poe’s old buddy Yeager, as well as a battered astromech droid called Bucket. With challenges like dangerous sky races and keeping his mission a secret from his newfound crew, Kaz is in over his head as he tries to avoid the danger of the First Order.

Filoni announced at Comic-Con that Disney is reviving the animated series “Star Wars: The Clone Wars” for a 12-episode final season, which will air on Disney’s forthcoming streaming service. The company is also developing a live-action “Star Wars” project from “Iron Man” director Jon Favreau for the service.