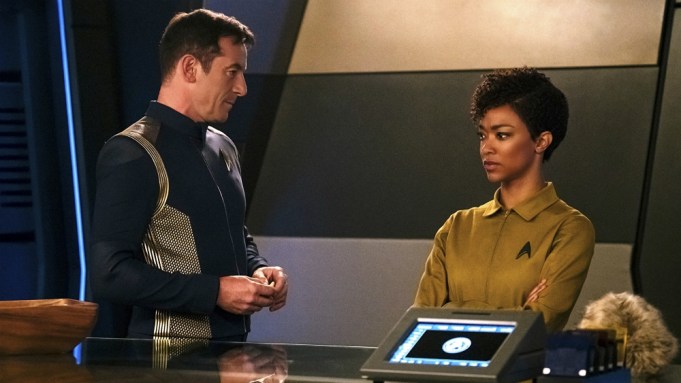 The “Star Trek” universe is expanding.

Rolling out on CBS All Access on a monthly basis, each of the four “Short Treks” episodes will be approximately 10-15 minutes long, and dig deeper into specific characters and themes explored on “Discovery.”

Rainn Wilson will return to play Harry Mudd in a short he will also direct, while Aldis Hodge will star in another as Craft, a man who finds himself as the only human on board a deserted ship. Additional episodes include a deep dive into Saru’s (Doug Jones) backstory as the first Kelpien to join Starfleet, and Tilly’s (Mary Wiseman) journey aboard the U.S.S. Discovery and her friendship with an unlikely partner.

In addition to the announcement, “Discovery” fans were treated to the first trailer for the upcoming second season, which came days after images from Season 2 were released, depicting Michael Burnham aboard the U.S.S. Enterprise and Linus, a Saurian officer.

The trailer links “Discovery,” which is set roughly a decade before James Kirk takes the bridge of the U.S.S. Enterprise, with former Enterprise Captain Christopher Pike taking command of the U.S.S. Discovery, due to a Federation regulation that takes effect in times of imminent danger. Red flares are popping up throughout space and the Federation can’t determine whether they’re friendly greetings or malevolent declarations. To top it off? Vulcan icon Spock may be involved.

The trailer also offers a first look at the show’s spiffy throwback uniforms, with Pike’s duds giving fans a flashback to the gold shirts of the original series.