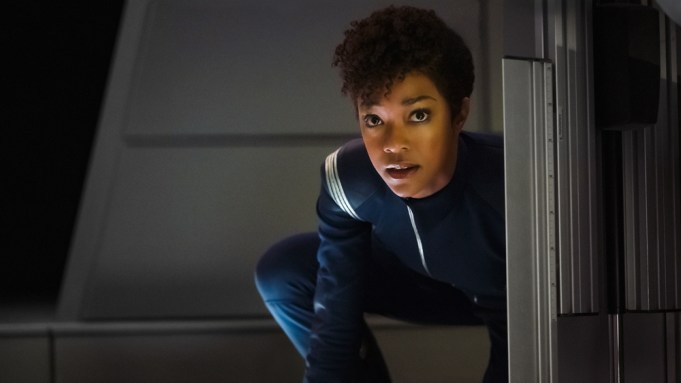 “Star Trek: Discovery” will bring some of the franchise’s signature characters aboard for season two.

“I can tell you that yes, you will be seeing Spock this season,” executive producer Alex Kurtzman said Friday during a Hall H panel for the show Friday.

Season one of the CBS All Access sci-fi drama ended with Discovery, the titular starship, encountering the USS Enterprise. Anson Mount, who in season two plays Capt. Christopher Pike — the character originated by Jeffrey Hunter in the original series — also revealed that another classic “Star Trek” character will be appearing on “Discovery.”

“We’re going to get to meet the original Number One,” Mount said. The character of Number One was played by Majel Barrett in the “The Cage,” the original pilot for the classic NBC “Star Trek” series. That pilot never aired, but footage from it was used in a later “Star Trek” episode “The Menagerie.”

Mount revealed that Number One will be played on Discovery by Rebecca Romijn. Casting for Spock has not yet been announced.

“We know we owe you a lot of answers about how this show connects to canon this season,” Kurtzman said, adding that fans will get those answers “just not the way that you expected.”

Kurtzman was also asked during the panel about the possibility that Jason Isaacs’ Capt. Gabriel Lorca may return in season two, to which Kurtzman said “maybe.” Lorca died in season one, but only after having been revealed to be a double from the Mirror Universe. The whereabouts of the prime “Star Trek” universe’s Lorca are unknown.

“I’m not here just to say hello,” Cruz said during the panel. He continued, “I’ll be back. We’re not telling you how. But we’re still reveling in the fact that this gay love has saved the universe. All the the universes.”

Season two of “Star Trek: Discovery” is set to premiere in January.