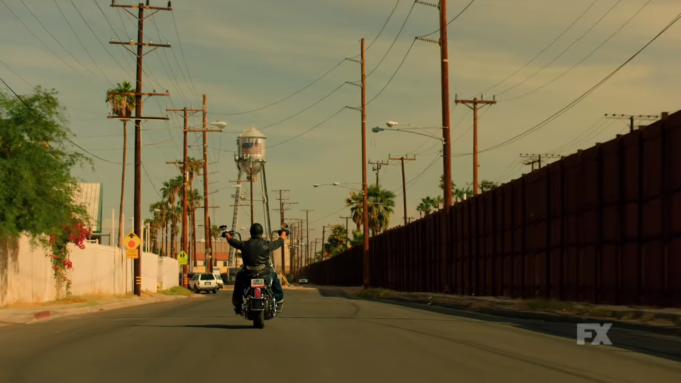 FX has released the first trailer for “Mayans M.C.” ahead of the show’s panel at San Diego Comic-Con.

The upcoming “Sons of Anarchy” spinoff focuses on the Hispanic rivals-turned-allies motorcycle club seen throughout “Sons of Anarchy.” The two-minute clip features J.D. Pardo’s character, Ezekiel “EZ” Reyes, a fresh Mayans M.C. prospect whose initial idea of the American dream had been ground into dust with a prison sentence years before.

With revving engines of Harley Davidson Road Kings growling in the background, the trailer opens up with a man telling Marcus Alvarez, the president of the club and once a recurring antagonist in “Sons of Anarchy,” that he can’t ask him to join the club unless he’s all in and really wants it.

“The club, the life, all of it. All in,” he says as the trailer cuts to Reyes riding down a dirt road in full leather.

Interspersed with quick shots of the club running drugs, the trailer then moves to Reyes coming to a stop outside a school. He has flashbacks of his younger self, a clean-cut student in a Stanford sweater with an affectionate girlfriend.

After showing off more of the club’s illegal activities, it’s clear Reyes is entering a life his family disapproves of. His father, played by Edward James Olmos, discourages him.

“My son, it’s going to twist you up, make you doubt everything you ever trust,” He says. “You’re in this now son, there’s no getting out.”

With the opening guitar riff of “Paint It Black,” the trailer explodes into a firefights and quick conversations from other Mayans deciding whether or not to put faith in their newest rookie.

“I say we trust him until we don’t,” one member says.

As the footage continues, it’s clear the police have a huge presence in the show’s inaugural season with shots of heavily armed policemen driving across the desert in armored Humvees. The trailer concludes with a quick shot of a cleaver coming down on a cut of meat and man screaming in pain off screen. One of the club members looks at Reyes, who has a slight look of shock on his face. “Start digging boy scout,” he says.