Sinclair Broadcast Group Faces Backlash Over Scripted Promos: ‘This Is Extremely Dangerous to Our Democracy’ 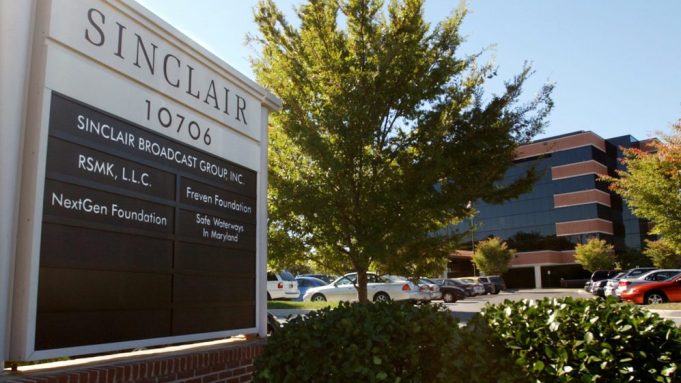 Earlier this year, CNN’s Brian Stelter reported that Sinclair Broadcast Group, the largest owner of local news stations in the country with over 200 owned or operated, would be requiring local news anchors to read a scripted promo that reflects a mistrust of the media. Some in the news industry expressed outrage at the time, but the anger has ignited Twitter in recent days after Deadspin created a compilation video showing dozens of newscasters reading the same promo.

The spot includes language painting the Sinclair-owned local news stations as the heralds of real news and refers to other media outlets as publishing “fake stories…stories that just aren’t true, without checking facts first.” The language reflects President Donald Trump’s insistence that the mainstream news media is “fake” and that certain narratives are pushed for political reasons. “Unfortunately, some members of the media use their platforms to push their own personal bias and agenda to control ‘exactly what people think,'” the promo reads.

“This is extremely dangerous to our democracy,” it continues, a tagline repeated numerous times in the compilation video. Jimmy Kimmel turned it around to comment on the promo itself in a tweet posted Saturday.

this is extremely dangerous to our democracy https://t.co/D1T8Z7J2Wn

Kimmel isn’t the only one to have expressed alarm over to the broadcasting agency’s news practices. John Oliver did a segment on Sinclair back in July 2017, which emphasized the company’s injection of conservative political views into their news reporting, including the daily must-run segment “Terrorism Alert Desk” and “Bottom Line with Boris,” which is required to air nine times per week and features former Trump surrogate Boris Epshteyn. According to Oliver’s reporting, circulating must-run material across all stations is not common practice by broadcast groups.

Actor and comedian Kumail Nanjiani also tweeted his concerns over the promos, writing, “Sinclair Broadcast Group is buying up local stations all over the country & using them to push their extremely biased agenda.”

Jinx! You owe me a Coke. https://t.co/bNitNTFAkt via @youtube

“House of Cards” creator Beau Willimon urged his followers to boycott the broadcaster and shared a link to a list of all Sinclair’s stations. “This is what corporate authoritarian propaganda looks like,” he wrote.

Thanks to all who shared the following link – a list of all of @WeAreSinclair stations. See if there’s one in your area and make sure you’re not watching it:https://t.co/450q51ilr1

The heightened scrutiny of Sinclair’s must-run segments comes as the FCC is nearing its final decision on Sinclair’s $3.9 billion takeover of Tribune Media. That deal promises to extend Sinclair’s reach into the nation’s biggest markets for the first time with more than 40 additional stations. Opponents of the deal have cited Sinclair’s centralized approach to aspects of its news operations as a reason that the FCC should limit the company’s expansion.

A full transcript of the promo, as transcribed by ThinkProgress based on KOMO Seattle’s version, is below. Watch the full compilation video above.

(B) Our greatest responsibility is to serve our Northwest communities. We are extremely proud of the quality, balanced journalism that KOMO News produces.

(A) But we’re concerned about the troubling trend of irresponsible, one sided news stories plaguing our country. The sharing of biased and false news has become all too common on social media.

(A) Unfortunately, some members of the media use their platforms to push their own personal bias and agenda to control ‘exactly what people think’…This is extremely dangerous to a democracy.

(B) At KOMO it’s our responsibility to pursue and report the truth. We understand Truth is neither politically ‘left nor right.’ Our commitment to factual reporting is the foundation of our credibility, now more than ever.

(A) But we are human and sometimes our reporting might fall short. If you believe our coverage is unfair please reach out to us by going to KOMOnews.com and clicking on CONTENT CONCERNS. We value your comments. We will respond back to you.

(B) We work very hard to seek the truth and strive to be fair, balanced and factual… We consider it our honor, our privilege to responsibly deliver the news every day.

(A) Thank you for watching and we appreciate your feedback.