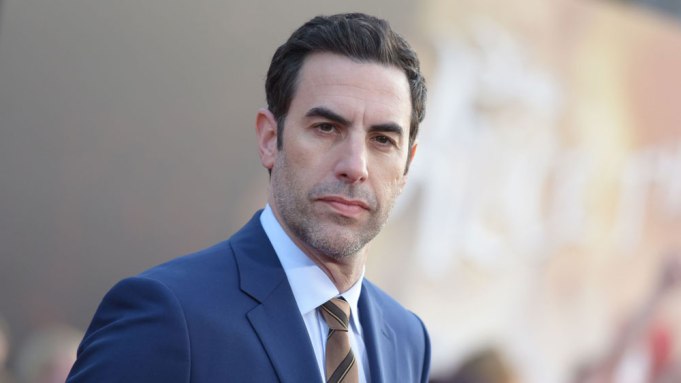 Showtime has revealed its new project with Sacha Baron Cohen. The pay cabler announced Monday that the comic’s new television series “Who Is America?” will premiere at midnight Eastern time July 15. Written and directed by Cohen, the seven-episode series will explore individuals known and unknown across the American political spectrum.

“Sacha is a comedic genius who shocks you with his audacity, bravery and inventiveness,” Showtime president and CEO David Nevins said. “He is the premier provocateur of our time, but not for the sake of ‘gotcha’ moments. Behind the elaborate setup is a genuine quest for the truth about people, places and politics. Nobody knows how to cause a stir like Sacha Baron Cohen, and it’s going to be fascinating to watch what happens when ‘Who Is America?’ is released on the world.”

“Who Is America?” marks Baron Cohen’s first series television project since “Da Ali G Show,” which aired on Channel 4 in the U.K. and HBO in the U.S. That series and the two movies that spun off from it — “Borat: Cultural Learnings of America for Make Benefit Glorious Nation of Kazakhstan” and “Brüno” — elevated Baron Cohen to comedy stardom in the U.S. Channel 4 will also air the new series, starting July 16.

Variety first reported last week that Baron Cohen was in talks with Showtime on a new series that would be similar in format to “Da Ali G Show,” which saw Baron Cohen conducting interviews with public figures in disguise as various characters and everyday people.

Cohen teased the project on July 4, releasing a cryptic video via social media that said, in part, “He’s back as you’ve never seen him before.”

The video also featured real footage of Donald Trump insulting Baron Cohen and ends with the logo of the now-defunct Trump University. Other than Trump, Baron Cohen could also be targeting other celebrities. He was reported to have filmed a stunt with O.J. Simpson in his Las Vegas hotel room in February. The new series is created and executive produced by Baron Cohen and is also executive produced by Anthony Hines, Todd Schulman, Andrew Newman, Dan Mazer and Adam Lowitt.

Watch a teaser for “Who Is America?” below: