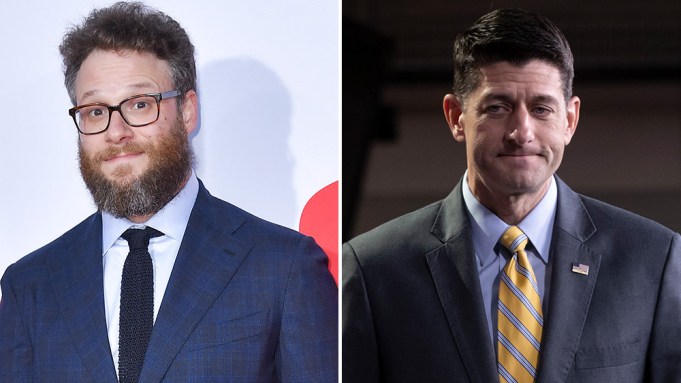 Like most of Hollywood, Seth Rogen has made his displeasure with the current administration and its activities clear. And evidently, that displeasure extends to denying photo ops to Republican Speaker of the House, Paul Ryan.

Rogen recounted the story Friday while on “The Late Show with Stephen Colbert.” The “Preacher” co-creator, as a longtime proponent and advocate for Alzheimer’s research, had been asked to speak about brain health at Mitt Romney’s annual summit. While there, he was approached by two “very nice,” “very white” young men who asked for a photo.

“Then they said, ‘Our dad wants to meet you,’ and I turned around and Paul Ryan was walking towards me,” Rogen said. “He came over and grabbed my hand and I’m just shaking his hand, I don’t know what to do, and he said, ‘Can I have a picture with you?'” With Ryan’s kids still present, Rogen said, “No way, man!” and went to admonish him for the Trump administration’s actions.

“I couldn’t stop,” Rogen added, “and I said, ‘Furthermore, I hate what you’re doing to the country at this moment and I count the days till you no longer have one iota of the power that you currently have.’ And I look over and his kids are still standing right there.”

He continued by saying that he feels “very conflicted” about the situation: “It’s not their fault,” he said, “but at the same time, they should probably learn that if they like a movie or song, the person that made that probably doesn’t like their dad that much.”