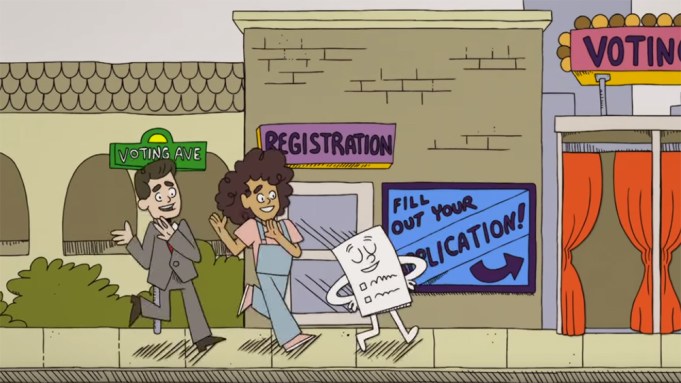 It looks like two is the magic number when it comes to promoting voter registration.

Yara Shahidi and Jimmy Fallon have teamed up ahead of the November midterm elections to encourage voting in a new “Schoolhouse Rock”-inspired animation “Voting Avenue,” set to air on Monday’s episode of “The Tonight Show.”

During the video, “Grown-ish” actress Shahidi walks down Voting Avenue in an effort to explain the importance of voting in the upcoming election. Along the way, she meets up with Fallon and a singing ballot, who explains the voting process from registration to voting booth, all while singing and dancing to a technicolor background.

Shahidi has previously been outspoken about voting, announcing last month that her non-profit Eighteen x 18 would be hosting a #WeVoteNext Summit to bring together young leaders from across America and inspire them to vote.

“We are calling our generation together before the midterm elections, so we can make sure that we have the tools and knowledge necessary to generate the largest youth voter turnout in history!” Shahidi said. “Whether it’s immigration, gun violence, climate change, criminal justice reform or student debt, our generation will hold our elected officials accountable this November.”

Other television stars have also begun to get behind voter registration, including “Full Frontal With Samantha Bee” host Samantha Bee, who released a new trivia app last week as part of her effort to inspire voting. Modeled after HQ-Trivia, Bee’s app tests users on U.S. politics, rewarding some correct answers with a $5000 cash prize each day while also encouraging them to register and vote come November.