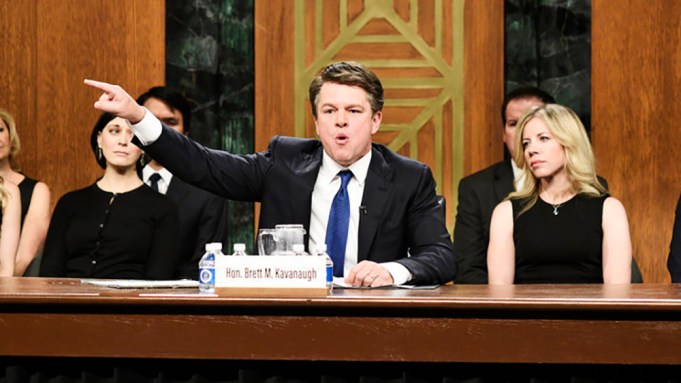 “Saturday Night Live” returned for its 44th season Sept. 29 and wasted no time diving back into political sketches, with Matt Damon appearing as Brett Kavanaugh and Rachel Dratch returning as Senator Amy Klobuchar for a cold open sketch about his hearing.

Mysteriously absent from the top of the hearing, as Alex Moffat’s Chuck Grassley explained he was “shadowboxing in the bathroom,” Damon’s Kavanaugh sat down in irate fashion and said, “Oh hell yeah” when asked if he was ready to begin.

“Let me tell you this,” he said. “I’m going to start at an 11. I’m going to take it to about a 15 real quick. First of all I showed this speech to almost no one — not my family, not my friends. … This is my speech. There are others like it, but this is mine. I wrote it myself last night while screaming into an empty bag of Doritos.”

Damon’s Kavanaugh went on to talk about the “con job” orchestrated by people like the Clintons, Kathy Griffin and “Mr. Ronan Sinatra.” Claiming he’s usually a “keg is half-full” kind of optimist, he said that what he has recently seen from the “monsters on this committee makes me want to puke — and not from beer.”

Getting visibly emotional, he pulled up his old “beautiful, creepy” calendars as “evidence” and claimed no one cared about evidence but just wanted to humiliate him in front of his wife, his parents and “Alyssa frigging Milano” — at which point, a cutout of Milano crept up behind him at the desk.

“Well guess what, I’m not backing down, you sons of bitches. I don’t know the meaning of the word ‘stop,'” he said.

When Cecily Strong’s Dianne Feinstein asked if he would submit to a FBI investigation, he replied, “You want to see a real investigation? Just look at my calendar.”

Later in the sketch, Dratch’s Klobuchar questioned Damon’s Kavanaugh about being a “frequent drinker” in high school and whether or not he “ever drank too many beers.”

When asked if he drank so much he blacked out, he stammered for a few seconds before claiming he had just blacked out for a second right then.

The sketch also covered discussed of Kavanaugh’s yearbook and the false definitions he gave of certain slang sexual terms. When called out, Damon’s Kavanaugh said, “That’s impossible because I didn’t have sex for many, many, many years. All I did was drink a lot and not think about having sex at all. I was the proudest, drunkest virgin you have ever seen and everyone can relate to that.”

The sketch also featured Kate McKinnon as Senator Lindsay Graham, who started by saying. “I know I’m supposed to shut up because I’m a single white male” but would not shut up because “this ain’t no trial, no due process. This is hell, that’s what it is, it’s hell.” Comparisons to Bill Cosby were brought up, to which Damon’s Kavanaugh pleaded for McKinnon’s Graham not to compare the two.

After all of this, when asked whether or not he had the right demeanor to be a Supreme Court Justice, Damon’s Kavanaugh said he “worked his butt off to get here — I busted my buns.”

“Am I angry? You’re damn right, but if you think I’m angry now, just wait until I get on that Supreme Court — because then you’re all going to pay,” he said.

But “SNL” wasn’t done with Kavanaugh with just one sketch. Michael Che and Colin Jost of course discussed the hearing during their “Weekend Update” segment as well, taking additional cracks at Kavanaugh keeping his 1982 calendar, lying about terms written in his yearbook and showing actual clips of Kavanaugh talking about drinking beer and working out.

“You’re not really helping yourself in a drunken assault case when you yell about how much you like drinking and how strong you are at the time,” Jost said, later noting that if you created a drinking game for every time Kavanaugh lied, “you’d be as drunk as [he] was in the summer of 1982.”

He also pointed out that the only ones keeping their composure during the hearing were the woman being questioned (Christine Blasey-Ford) and “the woman Republicans had to hire to talk to the woman being questioned.” On an optics level, Jost said, he understood why she was hired, but “if you’re not the right person to ask questions at a Senate hearing, maybe you’re not the right person to be a senator.”

Che chimed in to say that “all of this yelling and crying happened at this dude’s job interview. Typically when you ask about sexual assault and your drinking problem at a job interview, you don’t get the damn job!” While Che pointed out he doesn’t know if Kavanaugh actually has a history of assault or substance abuse, he does know he might — “and you shouldn’t be on the Supreme Court if you ‘might.’ You shouldn’t be on ‘The People’s Court’ if you ‘might,'” he said. “Sometimes might is enough. I don’t want to pet your dog if he might bite me. I don’t want to leave you in my house if you might be a crackhead. I’m not going to have sex with you if you might have dated Charlie Sheen.”

McKinnon also appeared in “Weekend Update” as Ruth Bader Ginsburg to discuss Kavanaugh’s confirmation hearing. “He thought his…was unfair?” she said. “[Mine] was they threw me in a river to see if I float.”

She also had words for Jeff Flake after noting that Republicans now want an FBI investigation just to “go ahead and confirm [Kavanaugh] anyway.” “Hey Jeff Flake, you can borrow a pair of my panties since you’re so concerned about covering your own a–,” she said.