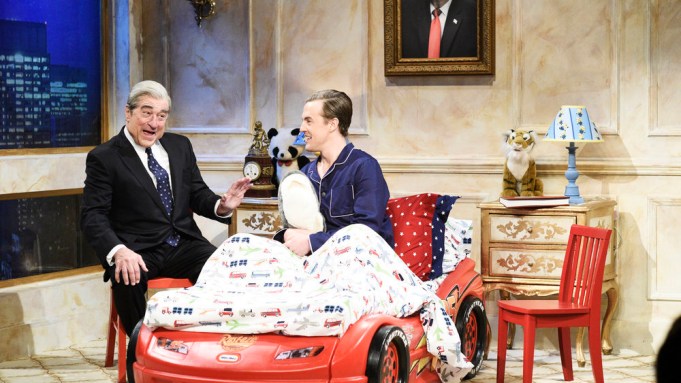 De Niro popped out of a closet in a sketch that skewered President Donald Trump and the mounting legal pressure Mueller’s investigation has put on many of Trump’s associates. Alex Moffatt played Eric Trump in a bedtime-story setting, with Mikey Day as Donald Trump Jr. delivering a reading to his brother of “Twas the Night Before Christmas.”

De Niro’s Mueller showed up, as “the boogeyman in the closet,” to pressure Eric Trump into participating with his investigation into the 2016 presidential campaign and allegations of collusion with Russia among members of Trump’s campaign staff.

Momoa’s monologue wrapped with a sketch featuring Leslie Jones and Kenan Thompson taking the actor through a rendition of the 1970s Parliament hit “Aqua Boogie.”

The Trump family was also the focus of a sketch for a TV show “Them Trumps” — “from the producers of ‘Empire’ ” — that asked the question “What if Donald Trump was black?”