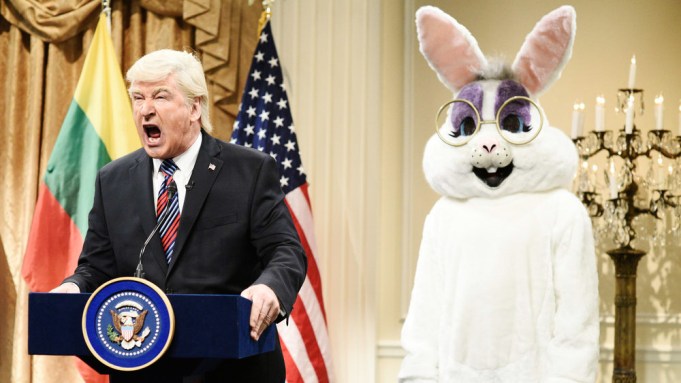 Alec Baldwin returned to “Saturday Night Live” for the cold-open sketch that saw President Donald Trump letting loose “freestyle” at a news conference with leaders of the Baltic states.

The segment opened with “SNL” trouper Leslie Jones in the guise of Fox News Channel anchor Harris Faulkner on a show dubbed “Outnumbered.” She delivered two “Fox News Alerts” within seconds. One raised the question of whether President Obama might still be impeached. The other simply featured a chyron that declared: “Mexicans.”

The coverage shifted to a live presidential news conference with Baldwin limning a peevish President Trump with three Eastern European presidents. He opened by telling the crowd that he needed the newser to go quickly because “I’ve got a lot of trade wars to escalate here.” He also bragged about having expelled “the infamous Chinese billionaire P.F. Chang.”

The news conference format allowed Baldwin to riff on a slew of headlines and controversies of the past week, from Trump’s fixation on Amazon to his decision to send National Guard troops to the U.S.-Mexican border. Trump volunteered that he has it out for Amazon chief Jeff Bezos because “he’s way richer than me and he admits to being bald so I feel threatened on two levels.”

“SNL” trouper Kate McKinnon played one of the Baltic leaders, dismissed by Trump as “Zsa Zsa.” He could not stop himself from offering “a big congratulation to Vladimir Putin” on Russia’s recent election. The giant Easter Bunny costume that made headlines last week also made an appearance, unnerving the president.

Baldwin’s Trump closed by declaring: “I don’t care about America. This whole presidency is a four- year cash grab and admitting that will probably get me four more years.”

Boseman noted in his monologue that his host gig is coming some two months after the opening of Marvel’s groundbreaking blockbuster featuring a predominantly black cast. Because “SNL” has already done a few “Black Panther” sketches, “there’s only really bad ideas left,” he said.

On “Weekend Update,” Trump headlines were the dominant focus at the top of the segment anchored by Colin Jost and Michael Che. Trump’s threats on tariffs, the volatility of the stock market and the continued fallout for Trump from the Stormy Daniels scandal.

In response to the assertion from Daniels’ lawyer that her recent “60 Minutes” interview omitted a section in which she described Trump’s genitals, Che stated: “Thank you.” And he added: “Stop trying to tell us what Donald Trump’s penis looks like. If I wanted to know what a 70-year-old penis looks like, I’d go down to the NBC gym.”

Also on “Weekend Update,” “SNL” regular Alex Moffat appeared as Facebook chief Mark Zuckerberg in full mea culpa mode, vowing to personally apologize to “all 87 million of you.” After parroting prepared remarks about the disclosure of Facebook’s massive privacy breach, Moffat’s Zuckerberg (in a plain brown T-shirt) petulantly declares his indifference to the unlawful exploitation of Facebook users’ personal information. “You gave it to me. No backsies. If you don’t like it you can suck it,” he said.