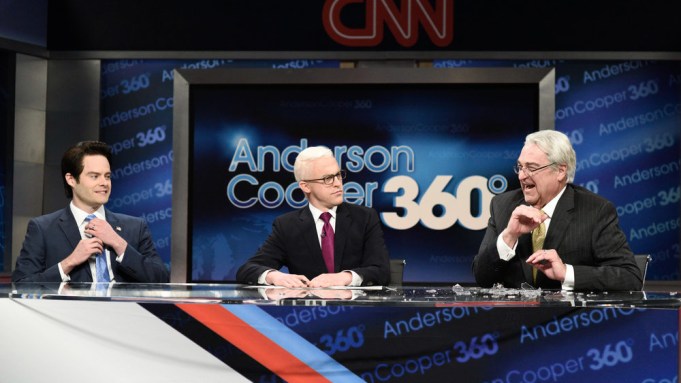 The bit presented as a segment of CNN’s “Anderson Cooper 360” skewered headlines of the week including President Donald Trump’s unceremonious firing of Secretary of State Rex Tillerson, who was limned by Goodman.

Kate McKinnon joined in as Attorney General Jeff Sessions. “Trump made me do it,” McKinnon’s Sessions blurted out as Moffat’s Anderson Cooper grilled Sessions about the firing of FBI veteran Andrew McCabe in what was seen as a politically motivated act directed by Trump. McCabe was axed just days before he was to retire, compromising his pension.

“I’m just a simple man who wanted to make things tough on immigrants,” McKinnon’s Sessions said. “Now I’m taking away the pension of a Christian white.”

Haden’s Scaramucci was predictably animated, tossing off exaggerated Italian-sounding exclamations and delivering “Godfather”-style kisses on the forehead to Armisen’s Wolff. Wolff was skewered for his boasting about his access to the White House and questions about some of the sensational claims in his recent book “Fire and Fury” about chaos behind-the-scenes of the Trump administration. “It’s all in my new book,” Armisen’s Wolff sniffed to Moffat’s Anderson Cooper. “I have a new source that tells me everything.”

The sketch had fun with the anecdote that Tillerson was sitting on the commode when he learned via a tweet from President Trump on Tuesday that he had been fired. “It’s just crazy how one day you’re the CEO of Exxon, and the next day you get fired by a man who used to sell steaks in the mail,” said Goodman’s Tillerson.

Hader and Armisen spent years working together as regular cast members of “SNL.” Following Hader’s monologue, the pair revived one of their signature sketches, the low-rent TV soap opera “The Californians.”

A vintage Hader character also returned to “Weekend Update”: The ultra-hipster Stefon offered tips on New York hot spots, just in time for St. Patrick’s Day. He talked up a new spot that offered “Farrakhans,” or “leprechauns who look like Farrah Fawcett.”

Other topics on “Weekend Update” with Colin Jost and Michael Che included the spate of firings in Washington, D.C. and news of Donald Trump Jr.’s wife, Vanessa, filing for divorce. “It’s a tough break but I’m sure he’ll take it on the no-chin,” Che said.

But the highlight of the report was McKinnon’s portrayal of embattled Education Secretary Betsy DeVos. DeVos drew scorn and criticism this past week after her weak performance during an interview on Sunday’s “60 Minutes.”

“I think the problem was the words that were coming out of my mouth were bad. That is because they came from my brain,” McKinnon’s DeVos said. Capturing DeVos’ mannerisms and speech patterns, McKinnon assured viewers: “I may not be very good on camera but behind the scenes my ideas are much worse.”