Samantha Bee Weighs in on Aziz Ansari Controversy: ‘It Doesn’t Have to Be Rape to Ruin Your Life’ 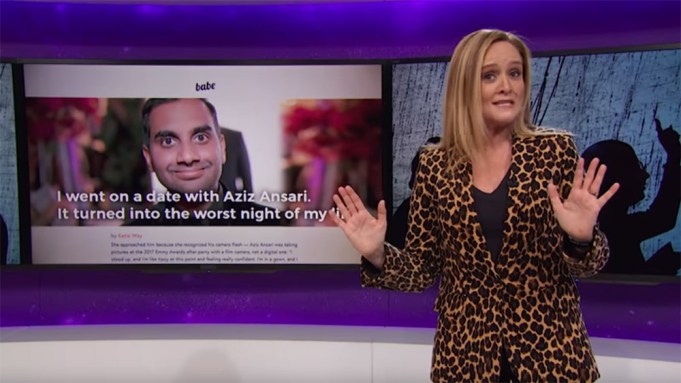 On Wednesday’s “Full Frontal With Samantha Bee,” the host took on critics of the #MeToo movement and those who said allegations against Aziz Ansari should not be part of the conversation.

#MeToo backlash has spread across social media in recent days, with some saying that the Ansari accusations have tainted the fight against sexual harassment and abuse. In her monologue, Bee responded, “What many fail to understand is that it doesn’t have to be rape to ruin your life and it doesn’t have to ruin your life to be worth speaking out about. Any kind of sexual harassment or coercion is unacceptable.”

“A lot of people are worried about Aziz’s career, which no one is trying to end, because again, we know the difference between a rapist, a workplace harasser, and an Aziz Ansari,” she added. “That doesn’t mean we have to be happy about any of them!”

Bee also argued for “setting a higher standard for sex than just not rape,” and being able to speak out when those standards are not met, specifically referencing Ansari’s book on sex and dating, “Modern Romance: An Investigation,” and his identification as a feminist.

Ansari was accused of sexual misconduct in a story on Babe.net, in which a woman claimed Ansari aggressively pushed her to perform sexual acts, despite her verbal and emotional cues that she was uncomfortable. In a statement, Ansari said that while the sexual activity was “by all indications was completely consensual,” he was “surprised and concerned” when she told him the next day she was uncomfortable. “I took her words to heart and responded privately after taking the time to process what she had said,” he added.

On “Full Frontal,” Bee questioned how women are expected to protect themselves, as the list of “S—– Media Men,” a controversial online spreadsheet documenting which men in the media industry to be wary of, and speaking out about experiences have both been criticized.

“If we go public with a story, we’re pretty crybabies hell-bent on destroying men’s careers. If we write a secret list to protect each other, we’re gossipy shrews telling lies in the shadows. What men literally can’t understand is, this isn’t about them,” she said.

Referencing the Time’s Up movement and the pin that many men, including Ansari, wore to the Golden Globes in support of it, Bee closed with, “Men, if you say you’re a feminist, then f— like a feminist. And if you don’t want to do that, take off your f—— pin because we are not your accessories,” she said.