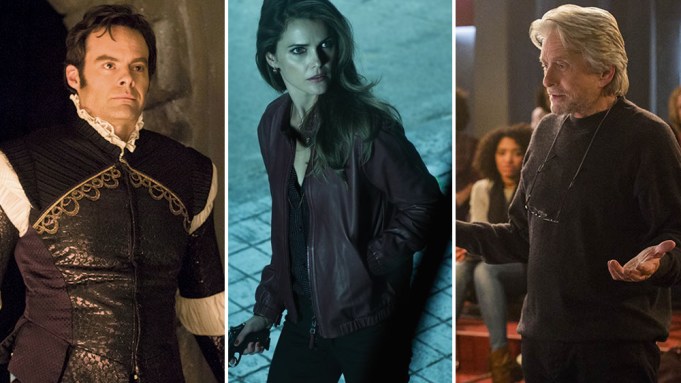 “Barry” and “The Kominsky Method” went all the way on their first SAG Awards ballot while “The Americans” joined the party at long last for its final season.

“Kominsky Method” and HBO’s “Barry” were the only freshman shows nominated in the comedy or drama ensemble category. The sixth and final season of FX’s “The Americans” grabbed its first-ever SAG Awards nom in any category, landing in the drama series ensemble race. FX’s “Atlanta” also earned its first SAG nom, for comedy ensemble.

The drama series ensemble field opened up significantly this year with past SAG nominees “The Crown,” “Game of Thrones,” and “Stranger Things” sitting it out this year because they did not air new episodes. That made room for AMC’s “Better Call Saul” and Netflix’s “Ozark” to claim their first noms for ensemble, alongside repeat nominee “The Handmaid’s Tale” and the 2018 winner, NBC’s “This Is Us.”

On the comedy side, Netflix’s “GLOW” was the only repeat comedy series ensemble nominee from this year’s field. Rounding out the category with “Atlanta,” “Barry,” and “Kominsky” is Amazon’s “The Marvelous Mrs. Maisel.” This year’s winner, HBO’s “Veep,” was ineligible for the 2019 race. SAG Awards favorite “Orange Is the New Black” was left out of the running for the first time in four years.

The SAG noms also seem to cement the new players in the fiercely competitive limited series/movie lead actress heat, with Patricia Arquette up for Showtime’s “Escape at Dannemora,” and Amy Adams and Patricia Clarkson competing for HBO’s “Sharp Objects.” Penelope Cruz for FX’s “The Assassination of Gianni Versace: American Crime Story” and Stone for “Maniac” round out the category.

Bill Pullman of USA’s “The Sinner” was a surprise nominee for limited series/movie actor. Hugh Grant is a contender for Amazon’s “A Very English Scandal.” Antonio Banderas (Nat Geo’s “Genius: Picasso”) and Darren Criss, who took home the Emmy in September for “Versace,” were expected.

SAG’s comedy actor category saw a complete turnover from the 2018 competition, when William H. Macy won for Showtime’s “Shameless.” Bill Hader and Henry Winkler won lead and supporting comedy Emmys, respectively, in September for their work in the dark comedy “Barry,” and both are up again, in the same category this time, for comedy actor honors. “Mrs. Maisel’s” Tony Shalhoub rounds out the category with “Kominsky’s” Douglas and Arkin.

There was more consistency on the distaff side with “GLOW’s” Alison Brie and “Grace & Frankie’s” Lily Tomlin and Jane Fonda garnering repeat mentions for comedy actress. “Mrs. Maisel’s” Rachel Brosnahan and Alex Borstein, the reigning Emmy champs for lead and supporting comedy actress, are also in the hunt.

The drama actor field opened up for Krasinski and “Handmaid Tale’s” Joseph Fiennes. Odenkirk, “Ozark’s” Jason Bateman and the 2018 winner, Sterling K. Brown of “This Is Us,” were repeat nominees.

(Pictured: “Barry,” “The Americans,” and “The Kominsky Method”)