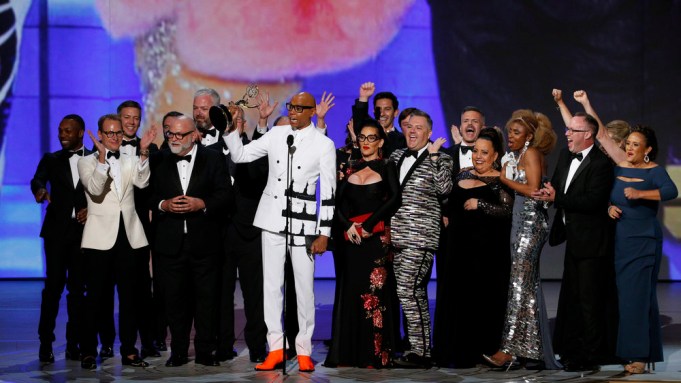 Amy Sherman-Palladino wasn’t the only winner to make history at the Primetime Emmys on Monday night.

While he may have bemoaned that he only had one line in the opening number as he brought out a telephone, RuPaul walked away with two awards by the end of the show for “RuPaul’s Drag Race.”

The audience erupted into cheers when “RuPaul’s Drag Race” took home the latter award with a particular close-up on Leslie Jones and Kate McKinnon during the broadcast.

Taking the stage in a custom Calvin Klein look featuring an Andy Warhol Statue of Liberty design on his jacket, RuPaul could not stop expressing how “lovely” the recognition was and “how happy we are to present this show.” Looking back over the past ten seasons of the show, he called out the “140 drag queens we’ve released into the wild.”

Closing out his speech, RuPaul took a moment to address all the “dreamers out there.” He said: “Listen, if you can’t love yourself, how the hell are you gonna love somebody else? Can I get an amen? Now let the music play!”