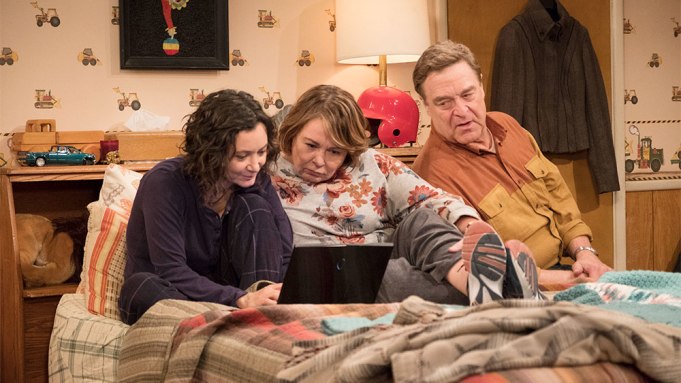 Talks between ABC and “Roseanne” producers on a possible spinoff of the canceled multicamera comedy are building momentum.

Sources tell Variety that the network is increasingly interested in finding a way to continue the series without controversial star Roseanne Barr, whose racist tweet last week triggered the sudden cancellation of the show. The network and producers late last week scheduled a meeting to discuss spinoff possibilities. Talks between ABC and exec producers, including Tom Werner, stretched through the weekend and are now ongoing.

Several significant obstacles, however, remain to potentially prevent a version of the series from continuing without Barr. “Roseanne” is based on a character created by Barr, who could argue that she therefore has an ownership stake in any iteration that includes other characters created for the series, such as Sara Gilbert’s Darlene Conner, around whom much spinoff speculation has centered. Any situation in which Barr would stand to gain financially from a new series is considered unpalatable to ABC and producers.

ABC announced on Tuesday morning that it had canceled “Roseanne” just hours after the star apologized for a racist tweet directed at Valerie Jarrett, a former aide to President Barack Obama. Barr subsequently apologized for the tweet, later blaming it on her consumption of the sleeping drug Ambien. But since the show’s cancellation, she has lashed out at fellow stars and producers, including Gilbert.

“Roseanne” finished the 2017-18 television season as the No. 1 show in the advertiser-coveted 18-49 demo, according to Nielsen live-plus-same-day numbers. Barr was featured prominently last month at the network’s joint upfront presentation with cable channel Freeform, where she introduced Disney-ABC Television Group president Ben Sherwood. The comic and the exec embraced in an onstage hug, with Barr joking that Sherwood was “the guy responsible for most of my tweets.”

In a statement last Tuesday, ABC Entertainment president Channing Dungey said, “Roseanne’s Twitter statement is abhorrent, repugnant, and inconsistent with our values, and we have decided to cancel her show.”