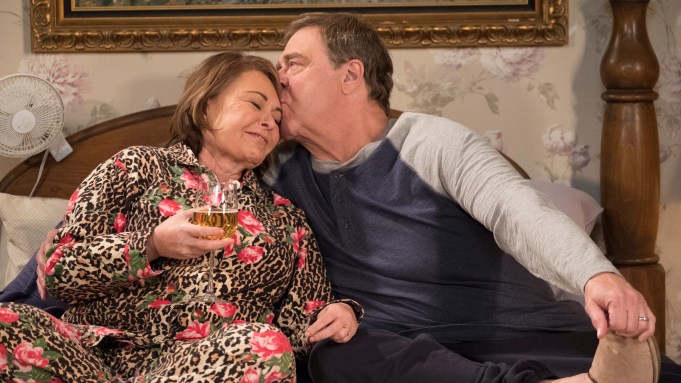 ABC has pulled the plug on the revival “Roseanne.”

The move comes after series star and creator Roseanne Barr made a comment on Twitter Tuesday morning referring to former Obama aide Valerie Jarrett as looking like the offspring of the “Muslim Brotherhood & Planet of the Apes.” Jarrett, an African-American, was born in Iran to American parents.

“Roseanne’s Twitter statement is abhorrent, repugnant and inconsistent with our values, and we have decided to cancel her show,” ABC Entertainment president Channing Dungey said in a statement.

Disney chairman and CEO Bob Iger voiced his support for the cancellation, tweeting, “There was only one thing to do here, and that was the right thing.”

Barr deleted her tweet about Jarrett not long after posting it. She followed it up with an apology that read, “I apologize to Valerie Jarrett and to all Americans. I am truly sorry for making a bad joke about her politics and her looks. I should have known better. Forgive me-my joke was in bad taste. I am now leaving Twitter.”

Just after Barr’s statement on Jarrett, Wanda Sykes, who worked as a consulting producer on the first revival season, announced she would not be returning for the show’s next season. Series co-star and executive producer Sara Gilbert then condemned Barr’s comments, saying, “Roseanne’s recent comments about Valerie Jarrett, and so much more, are abhorrent and do not reflect the beliefs of our cast and crew or anyone associated with our show. I am disappointed in her actions to say the least. This is incredibly sad and difficult for all of us, as we’ve created a show that we believe in, are proud of, and that audiences love — one that is separate and apart from the opinions and words of one cast member.”

Series showrunner Bruce Helford said in his own statement: “On behalf of all the writers and producers, we worked incredibly hard to create an amazing show. I was personally horrified and saddened by the comments and in no way do they reflect the values of the people who worked so hard to make this the iconic show that it is.”

Earlier this month, stand up comedian and “Roseanne” co-showrunner Whitney Cummings also announced she would not return to the show. She said that she would be unable to come back due to “work commitments and [her] tour schedule.”

The revival of the classic sitcom was set to air a 13-episode eleventh season this fall. The move represents a remarkable turn of events for the network, Barr, and a show that finished the season as the No. 1 scripted primetime television series in the 18-49 demo, according to Nielsen live-plus-same-day numbers. The one-hour premiere in March stunned industry experts when it opened to a staggering 5.2 rating and 18.4 million viewers. The premiere rose to 27.3 million viewers in Live +7 ratings, the largest-ever seven-day lift for any show on any network.

Just two weeks ago at ABC’s upfront presentation, Barr introduced Disney-ABC Television Group president Ben Sherwood, joking that he was “the guy responsible for most of my tweets.” Sherwood and Barr hugged onstage, and the the exec noted that ABC had not had television’s No. 1 show in 24 years. Dungey, during her portion of the presentation, bragged that “The premiere ratings even took us by surprise,” claiming that one in 10 Americans has seen the “Roseanne” revival premiere.

The statement by Barr would have demanded a strong response from any network. In the case of ABC, Dungey’s promotion in 2016 made her the first African-American woman to serve as entertainment president at a Big Four network.