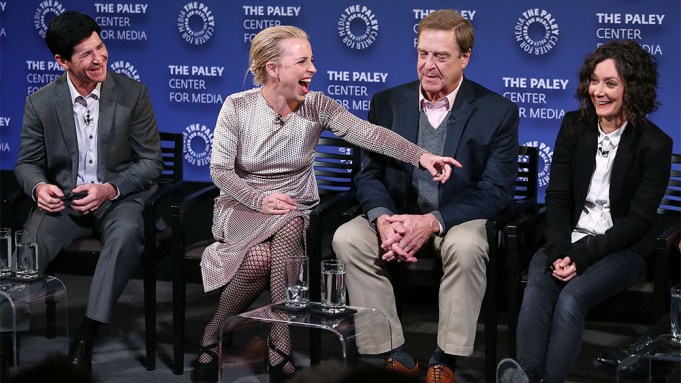 Roseanne Barr made it loud and clear that she was not pleased with how ABC killed off her character on Tuesday night’s premiere episode of “The Conners” — but even though her character is dead, could she ever return for a flashback scene?

While flashbacks featuring killed-off characters is typical for many TV shows, “The Conners” cast member Michael Fishman says there have been no formal conversations about bringing Barr back for any sort of guest role or cameo. However, the original “Roseanne” actor did say he personally would not rule out the possibility, teasing, “Never say never.”

“You know, at the current time, we haven’t really discussed that, but that’s one of those things, I would say, never say never,” Fishman said at PaleyFest New York, moments before “The Conners'” Tuesday night premiere. Fisherman continued, “I’m a big believer in second chances and forgiveness. I think that’s a really big thing, and I think this country is kind of built on that. People go through a lot of things, people make mistakes, everybody makes mistakes. The most successful people in our world aren’t the ones who don’t make mistakes, but the ones who learn the most from them.”

Fishman said he has been in contact with Barr, getting in touch with her as soon as her racially charged tweet went viral this past May, leading to the swift cancellation of the “Roseanne” reboot.

“I reached out to her the day all this happened. We’ve had interaction back and forth…and we’ve had private discourse going back and forth, but I really don’t think it’s appropriate for me to share that,” Fishman said. “What I would say is we’ve all worked with her a long time. We all have known or cared about somebody who said or did something that we didn’t always necessary agree with. That’s what families do, and how you deal with that, is you tell each other how much you care about each other, but you’re honest about the things you disagree on.”

Original cast member Lecy Goranson, who plays Becky Conner, revealed she has not been in contact with Barr. However, while the actress strongly disagrees with Barr’s rhetoric, she said she does not label Barr as a racist. Instead, she believes her controversial tweets were fueled by her political beliefs.

“I don’t think anyone should be called crazy, and it seems like she’s remorseful — I mean, I haven’t spoken to her, but it certainly seems that way,” Goranson said. “All I know is that I feel like I’ve never thought she was a racist. I think she made a big mistake. I think language like that shouldn’t be in our culture. I think it hurts others and it brings us back as human beings, but I think, for her, it was politically motivated and not racially motivated — I really believe that. And in an adult world, you have to pay consequences for what you say and do, and that’s what happened.”

Given that Barr is a vocal Trump supporter, is the cast concerned about losing any viewers, who stand by Barr — and President Trump?

“I don’t know if they will,” Goranson said when asked if she thinks Trump voters will tune into with the absence of Barr. “It depends. I think people are unique and are individuals and it’s unfair to group people so generally. I think some people who responded to the show will watch again and some people won’t.”