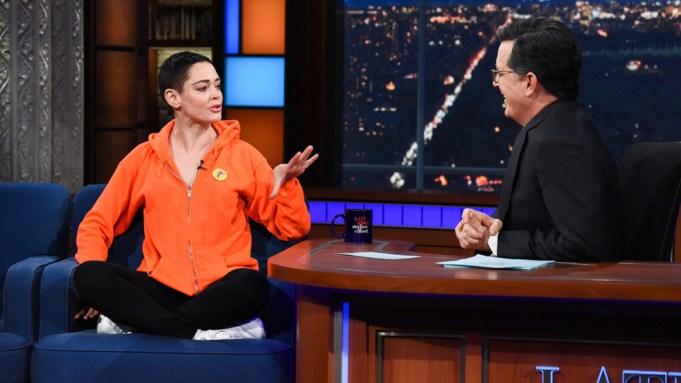 Appearing on “The Late Show With Stephen Colbert” on Wednesday night, Rose McGowan claimed to be “the architect” of Harvey Weinstein’s downfall.

When Colbert asked about women beginning to come forward with sexual misconduct allegations against the Hollywood mogul starting six months ago, she replied that she came forward a year ago and helped orchestrate the movement to bring him down. She also said she “sees things” when asked about the spies Weinstein allegedly sent to quiet her.

In the strange interview spanning the Bible, George W. Bush, and khakis, McGowan, wearing an orange hoodie, also addressed her recent arrest on drug charges, saying, “Yes, I’ve had handcuffs on me, but no one else in this situation. Isn’t that grand?”

“I think we can do better, societally,” she added during another segment of the interview. “I think we can be looser, 10%, have more fun, be better, see more colors, run, and what are we doing? It’s not working out so well here. Am I wrong? There’s a bus on fire with a madman and a blindfold, and everyone’s still talking about it as if it’s nice. It’s not nice. It’s f—ing weird, right? Whoa. Shake it up because otherwise we’re all maybe gonna die sooner than we think.”

On Thursday, McGowan defended herself on Twitter from those criticizing the interview, tweeting “I just have a different personality than you. I don’t follow protocol. And I will talk about WHAT I WANT. I requested a Dick Cavett free form hangout.”

“I am unusual, that IS the point. I do not care for formats or traditional thought. Every interview of mine is different, just like a mood. A lot of you are meeting me for the first time. Don’t compare me to what you would do or be. Be free,” she said in another tweet.

2) I am bored of formats and questions. I am done with traditional structure. If you’re not with the fake tradition of traditional promotional “appearances” then by all means, stay in your square, but DO NOT APPLY TO ME . @TheAVClub

I am unusual, that IS the point. I do not care for formats or traditional thought. Every interview of mine is different, just like a mood. A lot of you are meeting me for the first time. Don’t compare me to what you would do or be. Be free.

Prior to appearing on Colbert, McGowan had a breakdown at a New York book signing for new memoir “Brave,” which centers on her Weinstein allegations and her journey as an activist. After a woman in the audience criticized her for not doing enough for transgender women, she responded, “So f—ing shut up. Please systemically. For once. In the world. You know what I’m talking about. Just tell the God damned truth. Stop boxing everybody into s—. I didn’t agree to your cis f—ing world. Ok? F— off.”

The actress has been making a number of TV appearances this week in promoting “Brave” and “Citizen Rose,” her new docuseries on E!. Also on Wednesday,  McGowan replied through her publicist to Weinstein’s rebuttal of her accusation that the then-studio mogul raped her, standing by her statements.