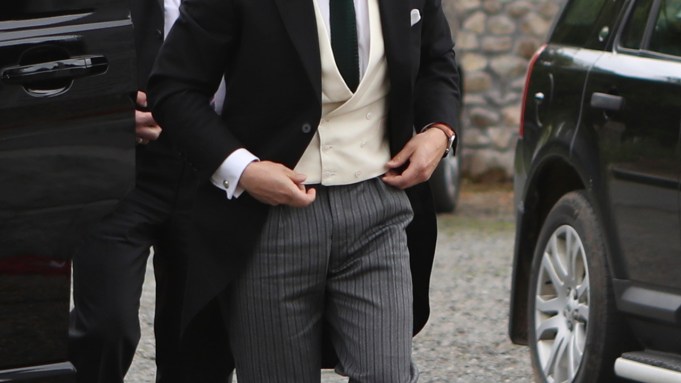 “Game of Thrones” stars Rose Leslie and Kit Harington were married Saturday in Aberdeenshire, Scotland. The pair began dating in 2012 after meeting on “Game of Thrones” and announced their engagement in September 2017. The ceremony was held at Rayne Church with a reception at nearby Wardhill Castle, which is owned by Leslie’s father.

Their nuptials were attended by several members of the “Game of Thrones” cast, including Peter Dinklage, Sophie Turner, Maisie Williams, and Emilia Clarke.

Harington starred in BBC One’s “Gunpowder,” about the Gunpowder Plot of 1605 and in which he played Robert Catesby, of whom Harington is a direct descendant. He will appear in “The Death and Life of John F. Donovan,” also starring Natalie Portman, Susan Sarandon, Bella Thorne, Jacob Tremblay, Thandie Newton, and Kathy Bates. His role on “Game of Thrones” earned him an Emmy nomination for outstanding supporting actor in a drama series. Harington is a native of London and attended the Royal Central School of Speech & Drama.

Leslie, born Rose Eleanor Arbuthnot-Leslie, first rose to fame in Season 1 of BBC’s hit drama “Downton Abbey.” She began appearing on “Game of Thrones” in Season 2 until her character, the wilding Ygritte, the love interest of Harington’s Jon Snow, was killed off in Season 4. She currently stars on CBS All Access’ legal and political drama “The Good Fight.” Leslie was born to a noble family in Scotland and was raised at Lickleyhead Castle, her family’s 15th century ancestral seat. Her father is the Aberdeenshire Chieftain of Clan Leslie.