Robin Wright on Time’s Up, Pay Parity and ‘Wonder Woman 1984’ 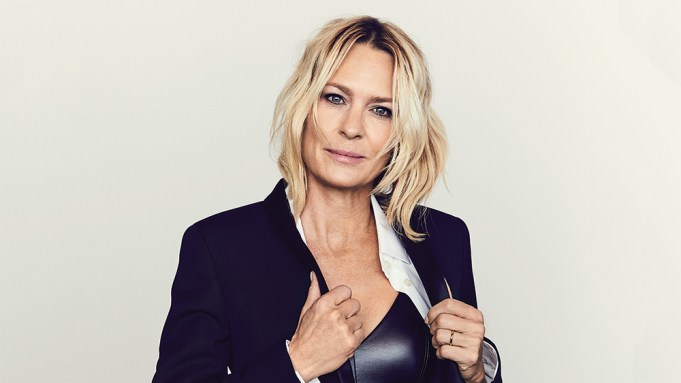 Robin Wright has long been vocal about equality for women. But the spotlight intensified around her when her longtime co-star on “House of Cards,” Kevin Spacey, stood accused of multiple allegations of sexual misconduct.

Wright was “always ready to do something different,” she says, going into this sixth season of “House of Cards,” which had long been planned as the series finale. But its swan song is playing out against the backdrop of this seismic year, one which Wright says she hopes brings lasting change.

“The conversation has certainly opened up, that we need to start speaking differently about boundaries,” she says. “And it has shifted the energy in every workplace and just in society.”

She says she’s hopeful that what’s happening now will have an impact on the next generation. “I really have been on this path of talking about, or wanting to focus on this new generation, the little boys and the little girls,” she says. “Let’s start there. Because we all — women, men — we’ve all just gone through life going, ‘That’s just the way things are.’ I’m guilty of it, too: ‘Yeah, that’s just the way it is,’ if you felt someone cross a line with you. We need to change that tape. It’s not going to be that way anymore. And when you teach the little ones the difference between right and wrong and they grow up with that, that’s going to be a whole new world.”

Another issue she’s passionate about is pay parity — a fight she waged herself long before Spacey’s exit. Her advice: “Be patient, and never give up.”

“The topic should not be deliberately silenced, so it’s always in the ether,” she says. “I understand it’s difficult to walk away. I get that. Certain people have that scenario where they can’t say, ‘Give me this or I’ll walk.’ But I just think it’s important to be diligent and never give up. It’s going to take time, like any movement does. … Equal work, equal pay. It’s really simple.”

She’s also an advocate for getting more women behind the camera, now that she’s found her own passion for directing. The numbers on parity are dire — women direct just 25% of films. It’s baby steps, she admits, but she recounts conversations she’s had recently with two male executives who told her they’d hire a woman as a director on principle. So she’s working on getting more women into the pipeline, “no different than what guys did for years,” she says. “It’s opening up the pool to women being able to do exactly what those men have done to get where they are.”

She credits her tenure on “Cards” with opening up opportunities for her, especially strong leadership roles for women. That’s a path that led to her star turn in “Wonder Woman” as General Antiope, a role she’ll revisit for the upcoming sequel, which recently finished filming.

“It’s going to be an iconic time: a little Wonder Woman in the vortex of this movement,” she says. “And what Wonder Woman, who was created in the ‘40s, what does she symbolize? Justice and equality and speaking the truth. So to be a part of that enhancement, as Wonder Woman’s general, it’s so great.”