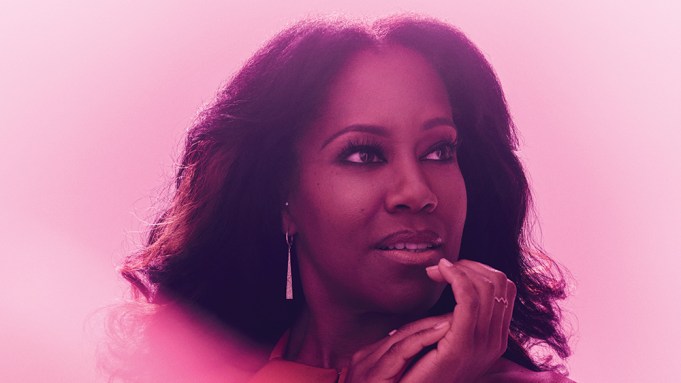 Long before she was an actress, Regina King dreamed of becoming a dentist.

King has ample reason to grin these days, from claiming her third Emmy trophy last month to the boisterous reaction from the crowd in the Microsoft Theater (“I realized my family was much bigger than what I thought seven minutes before,” she says) to her forceful role in Barry Jenkins’ “If Beale Street Could Talk,” which is generating awards buzz (“I did not realize how much we as a people — and I’m not saying as a black people; I’m saying as a human people — need a film like this”). Alongside a slate that’s overbooked with directing gigs — she’s become a go-to helmer for hits like “This Is Us” and “Insecure” — and her production deal with ABC Studios, she’s ecstatic about getting to play a superhero in Damon Lindelof’s “Watchmen,” which was just picked up to series at HBO. “I have the opportunity to do things I don’t think anyone has ever seen me do as an actress,” she says. (Translation: She gets to “kick ass.”)

“You’re never supposed to stop dreaming,” she says. “Right now, I’m an actress, producer, director, not always in that order, but we’ll sit down five years from now and my title might have another hyphen in it.”

Given King’s sheer force of will, the odds couldn’t be more clearly in her favor. It’s been more than 30 years since she made her Hollywood debut on the NBC sitcom “227,” and she’s barely stopped working since. “I learned how to be a professional and the importance of positive self-representation at a very early age,” she says.

That’s why she’s made it a priority to work with the “I Have a Dream” Foundation – Los Angeles, which provides academic and financial aid to help children from low-income communities pursue higher education.

“I am doing what God meant for us all to do,” says King, whose efforts include serving as a public advocate for the charity and also actively fundraising. “You have to put your money where your mouth is. If you believe in the future, it starts with fertilizing those babies, those seeds.”

She proudly traces her commitment to philanthropy through her family tree: She recently starred in an episode of “Who Do You Think You Are?” and learned that her great-great-great-grandfather was a preacher who dedicated his life to teaching uneducated black men and women. It’s a lesson she hopes to pass along to her son.

“I’m a big person about energy: The energy you put out, that’s what comes back,” she says. “Be the change you wish to see.”

For a full Q&A with Regina King, click here.