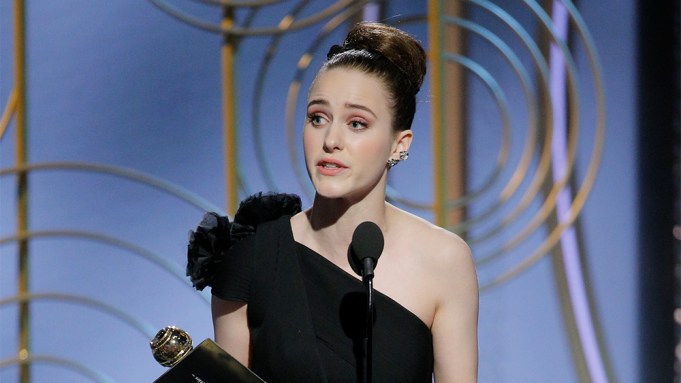 Rachel Brosnahan won the best actress in a comedy series award at the Golden Globes on Sunday for her role in the series “The Marvelous Mrs. Maisel.”

She beat out Pamela Adlon from “Better Things,” Alison Brie from “Glow,” Issa Rae from “Insecure,” and Frankie Shaw from “SMILF.”

Brosnahan opened her acceptance speech by thanking the Hollywood Foreign Press Association and the show’s “fearless creators and leaders” Amy Sherman-Palladino and Daniel Palladino. She then gave a short shout-out to Oprah Winfrey: “Hi, Oprah.”

“This is a story about a bold and brilliant and complicated woman, and I am endlessly proud to be a part of it, but there are so many women’s stories out there that still need and deserve to be told.”

Brosnahan earned her first Golden Globe nomination this year for starring as the title character in the new Amazon series. She had previously been nominated for an Emmy in the best guest actress in a drama series category for her work on Netflix’s “House of Cards.”

Backstage, Brosnahan said she was overwhelmed by the response to “Mrs. Maisel,” which marked her first effort in a comedy. Brosnahan said she was drawn to the character because Midge Maisel was “the most unapologetically confident woman I have ever read in a script.” And she hopes to take cues from Midge in her own life.

“Finding the confidence in my work to bring this woman to life was challenging and terrifying,” she said. “I’ve  never done comedy. This whole thing was like a nightmare and a dream at the same time.”

“Mrs. Maisel,” which received widespread critical acclaim upon its release in November, received a two-season order when it was first picked up. The second season is set to air in 2018.