The cast of “Queer Eye” says they were “blown away” by the response to their new book, and are hoping the project will inspire people and impact lives, as an organic extension of their hit Netflix show.

Released earlier this month, the hardcover coffee table book, titled “Love Yourself. Love Your Life,” offers a behind the scenes look at the making of the show, along with five chapters of advice that align with each of the cast members’ areas of expertise (food and wine, style, grooming, home decor, and culture). In grooming expert Jonathan Van Ness’ words: the book features, “Longer moments with each of us and lots of gorgeous photos.”

Also available on Kindle and as an audiobook (narrated by the cast), “Love Yourself” is already a #1 best-seller on the Amazon charts. According to Antoni Porowski, the show’s resident foodie, it was important to the cast to find other ways to reach out to their fans and followers, beyond the two seasons of the show. “As a book lover, I think it’s important to use mediums of stimulation other than television sometimes,” he shares. “It’s a positive book that’s fun and hopefully has some lessons in it for people to apply to their own lives. I’m [also] just excited about encouraging people to read.” 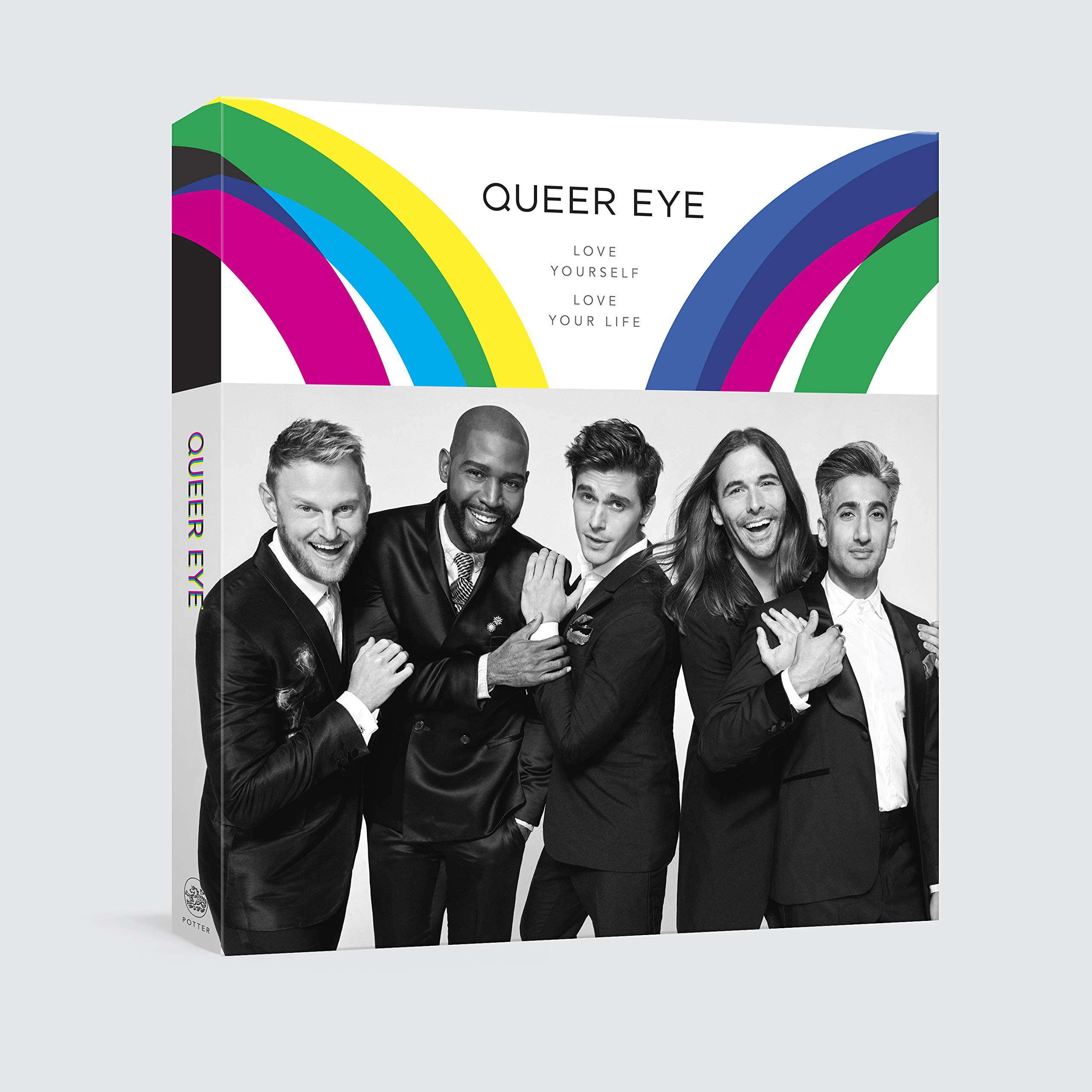 With the cast’s trademark wit and charm, each chapter revolves around a declaration: “Gorgeous, Inside and Out” sets the tone for Van Ness’ hair and skincare tips, while “Let’s Be Real” leads to an introspective lesson from culture expert, Karamo Brown, about defining your personal brand. Along with advice on everything from self-care to how to entertain company, the book includes personal anecdotes from each of the cast members (Van Ness, Brown and Porowski are joined by fashion expert Tan France, and interior designer Bobby Berk), who share their coming out stories and experiences as gay men in their respective industries.

Delving into the personal stories of the cast members was a marked departure from the original “Queer Eye For The Straight Guy” (streaming on Amazon Prime right now), and it was an intentional one, according to the showrunners. The new book includes a foreward from David Collins, Michael Williams and Rob Eric, the executive producers of “Queer Eye” (Collins and Williams are also credited as co-creators of the original series). The three say it was important for the cast this time around to share more about their backstories and real lives, something that wasn’t directly addressed in the first incarnation of the show. “With our country divided on so many issues,” the producers write, “[we needed] even more of a bridge, to bring people together. In order to bring people together, you have to share your personal experiences. That’s how we bond.”

The cast, who are all credited as co-authors, say they hope the book will not only be a fun scrapbook to scroll through, but also a source of encouragement for those who need a little boost. “The book is so relatable to anyone at any age,” says Berk, “and it really doesn’t discriminate against age, race or where you came from. I’ve received notes from young teenagers and middle-aged adults saying how much this book has changed their lives.”

The cast says they’ve loved seeing the reactions from people buying the book, whether as a holiday gift for others or for themselves. “Having my former clients sending me photos of them buying the book and loving it has been so cute,” says Van Ness.

“I love seeing the book next to Michelle Obama’s [book, “Becoming”], which I’ve been tagged in a lot recently,” adds Berk. “It’s really cool to be placed next to such an incredibly inspiring person.”

As for holiday plans, both Van Ness and Berk say they are excited to have some downtime to spend with their respective partners and families, while Porowski says he’ll be with family stateside and then down South for New Year’s to celebrate his goddaughter’s christening.

With an Emmy-winning show, a new book and a new season of “Queer Eye” ahead, the guys say they’re incredibly grateful, especially during this time of year, to be part of something that has spawned such a message of positivity and hope.

“I’m so blown away every day by my fans and everyone I’ve had the chance to work with, and all of it just feels so surreal,” says Berk. “Years ago, I never thought I’d be lucky enough to do what I love and I’m constantly pinching myself, trying to grasp how much my life has changed just this past year.”

“It’s been overwhelming and also wonderful, and truly life changing,” adds Porowski. “I could never imagine a life where my career would direct me to helping others, and I am so glad it did.”

“Love Yourself. Love Your Life” is available now on Amazon.com. You can also download and listen to it for free on audiobook with a 30-day free trial to Amazon Audible.

VarietySPY editorial products are independently selected. If you buy something through our links, PMC may earn an affiliate commission.