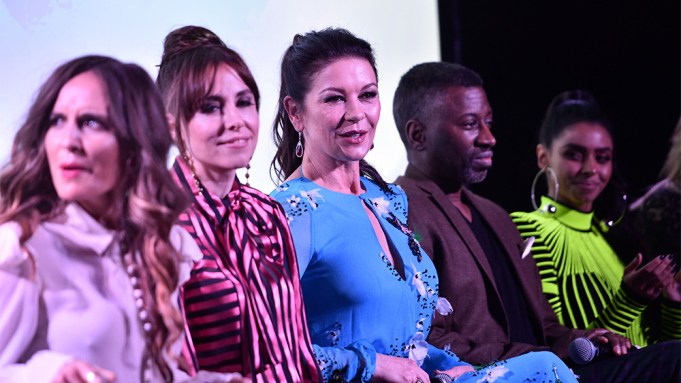 “Yes, there is a preconceived idea of what the pageant world is,” said Zeta-Jones said at the Variety sponsored world premiere of “Queen America.”

“I started as a tap dancer, so I understand the idea of what it means to better yourself and further yourself and what it takes for women who come from one place to get to somewhere else,” Zeta-Jones added.

Set in Tulsa, Okla., the series follows Zeta-Jones’ character Vicki Ellis — a famously tough pageant coach whose mission in life is to shape young women into winning pageant queens — and her young protégé Samantha. The 10-episode series seeks to point out not only the flaws and humor of the pageant world, but also the ways in which it presents opportunities to young girls who wouldn’t otherwise have access to them.

“I grew up in Tulsa…I knew so many girls that [pageants] did incredible things for,” said show creator Meaghan Oppenheimer. “Girls that were able to pay their way through college, girls that were in foster care that pageants were a way to the future for them. There are a lot of negative things about the [pageant] world and I didn’t want to let anyone off the hook for that, but there are a lot of girls that I’ve spoken to, that I’ve interviewed, that are so grateful to pageants.”

One response to “‘Queen America’ Creator, Catherine Zeta-Jones Talk the Pros and Cons of Pageantry”