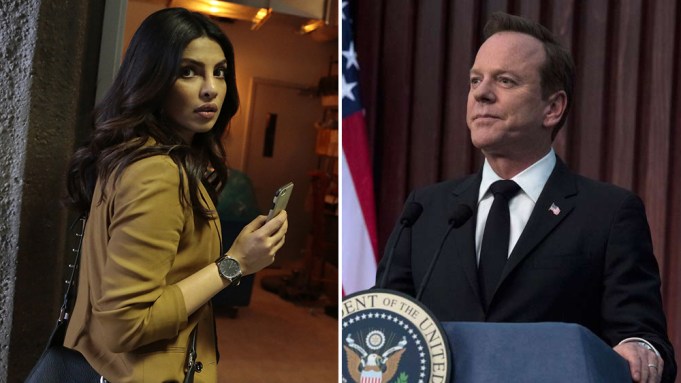 Coming off its second season, “Designated” Survivor starred Kiefer Sutherland as Tom Kirkman, a man who became president in the series premiere after a catastrophic bombing killed the majority of the country’s leaders. While the FBI worked to get to the bottom of who was really to blame for the bombing, Kirkman worked on rebuilding the country. In the second season, a year after he took office, he was still searching for the mastermind of the attack while dealing with new threats on their soil and abroad.

“Designated Surivor” went through four showrunners in two seasons. ABC had been looking for a new showrunner for a potential third season.

“Quantico,” produced by ABC Studios and the Mark Gordon Company, starred Priyanka Chopra as a U.S. intelligence agent. The series was retooled for season 3 with new showrunner Michael Seitzman taking over for Joshua Safran.

Three episodes into its third season, “Quantico” is averaging a 0.5 rating in the 18-49 demo and 2.3 million total viewers, according to Nielsen live-plus-same day numbers.