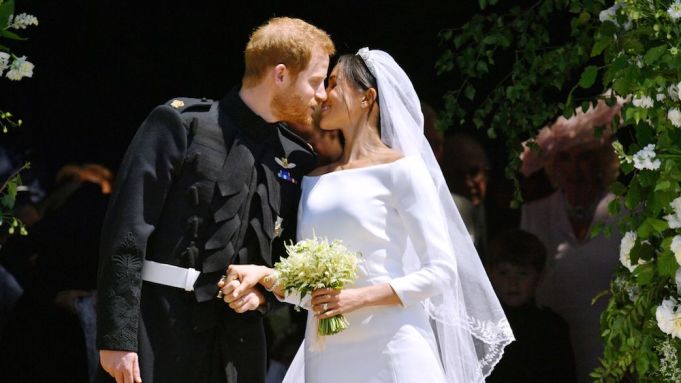 UPDATED: Prince Harry, sixth in line to the British throne, has married U.S. actress Meghan Markle. The couple exchanged vows in a spectacular ceremony on Saturday beamed around the world to millions of viewers enthralled by the pomp and grandeur of the much-anticipated royal occasion. The Archbishop of Canterbury Justin Welby proclaimed them husband and wife at 12:40 p.m. local time (4:40 a.m. PT).

The couple were met with huge cheers as they exited St. George’s Chapel at 1:05 p.m. and kissed on its steps. Thousands cheered the newlyweds as they rode through Windsor in a carriage procession following the wedding. An estimated 120,000 well-wishers lined the route for a first glimpse of the new Duke and Duchess of Sussex, as they will now be known.

Although Prince Harry’s official name in Henry Charles Albert David and Markle’s first name is Rachel (Meghan is her middle name) the service used their more familiar public monikers “Harry and Meghan.” However, their full names were used in the preface read by the Dean of Windsor, David Conner, spiritual head of the Canons of St. George’s Chapel at Windsor Castle, who conducted the service.

Keeping with the modernization of wedding vows, Markle omitted the vow to “obey” her husband. Harry’s mother, then Lady Diana Spencer, became the first royal bride to omit the word from her vows when she married Prince Charles in 1981. While the subsequent weddings of Charles’ brothers, Prince Andrew and Prince Edward, re-introduced “obey” for the bride, Kate Middleton once again skipped it when she married Prince William in 2011.

On exchanging of the rings both said: “I give you this ring as a sign of our marriage. With my body I honor you, all that I am I give to you, and all that I have I share with you.” Markle’s was fashioned from a piece of Welsh gold gifted to her by Queen Elizabeth II. In a break with royal tradition Prince Harry will also wear a platinum band.

It was a sunny day in Windsor as the wedding ceremony took place at the 500-year old St George’s Chapel in the grounds of royal residence Windsor Castle, where Prince Harry, 33, was christened in 1984. It was the 16th royal wedding to take place in the chapel since 1863.

The bride arrived at St. George’s Chapel at one minute past noon (4:01 a.m. PT) to a special fanfare, composed especially for the bride by the State Trumpeters, in a wedding dress designed by British designer Clare Waight Keller from French fashion house Givenchy. Her veil featured a design representing the distinctive flora of each of the 53 countries of the British Commonwealth.

Markle walked down the first stage of the aisle alone, followed by her page boys and bridesmaids, before taking the arm of Harry’s father, Prince Charles, to be accompanied to Prince Harry at the altar. Kensington Palace had tweeted Friday that the heir to the throne was “pleased to be able to welcome Ms. Markle to The Royal Family in this way.”

The bride’s father, Thomas Markle, had originally been expected to accompany his daughter down the aisle, but she confirmed Thursday that he would not be traveling to England after undergoing heart surgery on Wednesday in Mexico. “Sadly, my father will not be attending our wedding. I have always cared for my father and hope he can be given the space he needs to focus on his health,” Markle said Thursday.

Thousands of journalists were in Windsor to cover the event, sending back reports to dozen of countries across the globe to an estimated viewing audience of 1.9 billion. The U.S. news networks all sent teams to provide blow-by-blow coverage of the first royal wedding in Britain in seven years. Savannah Guthrie and Hoda Kotb co-anchored “Today at the Royal Wedding” from a vantage point overlooking the castle, along with Megyn Kelly, Kathie Lee Gifford, Al Roker and Sheinelle Jones. The event also lit up social media networks.

The ceremony was officiated by Archbishop of Canterbury Justin Welby, the principal leader of the Church of England, who had baptized Markle, 36, into the Anglican church on March 6. Welby had admitted to taking inspiration from grime artist Stormzy’s track “Blinded by the Light” to calm his nerves. “There’s a line in that: ‘I stay prayed up and get the job done.’ I think that sort of sums it up,” Welby told BBC radio earlier this month.

U.S. bishop Michael Bruce Curry, presiding bishop of the Episcopal Church of the U.S.A., delivered a rousing address about the power of love. Bishop Curry read from the psalms of Solomon before quoting Martin Luther King: “We must discover the power of love, the redemptive power of love and when we do that we will make of this old world a new world, for love in the only way.” “There’s power in love,” said Curry. “There is power in love to lift up and liberate when nothing else will.” Addressing the couple directly Curry said: “My brother, my sister, God love, God bless you and may God hold us all in those almighty hands of love.”

The address was followed a rendition of Ben E. King’s “Stand By Me,” performed by the Kingdom Gospel Choir, conducted by Karen Gibson.

Prince William, who is second in line to the throne, acted as best man for his younger brother. William’s 3-year-old daughter, Princess Charlotte, was one of six bridesmaids, alongside Harry’s goddaughters Florence van Cutsem and Zalie Warren; Markle’s goddaughters Remi and Rylan Litt; and Ivy Mulroney, the daughter of Markle’s close friend and stylist Jessica Mulroney, whom she met while filming “Suits” in Canada. Ivy’s older brothers, twins Brian and John, acted as page boys in the service, alongside Prince George and Harry’s godson Jasper Dyer.

Despite the expectations of some, there was no role in the service for Markle’s close friend, author Lindsay Roth, whom she has known since their college days. Markle was Roth’s bridesmaid two years ago.

In a break with tradition, Markle’s mother, Doria Ragland, accompanied her daughter from their overnight accommodation at the Cliveden House Hotel to the venue, exchanging places with the bridesmaids and page boys via a brief stop at Windsor Castle en route to St. George’s Chapel. The move had been planned even before Thomas Markle dropped out of the proceedings.

Members of the royal family attending included Queen Elizabeth II; Prince Charles and his wife, Camilla, Duchess of Cornwall; and Prince William and his wife, Kate, the Duchess of Cambridge. Prince Philip, the queen’s husband, attended the ceremony in St. George’s Chapel but was not expected to attend the receptions. Prince Louis, William and Kate’s newborn son, was not at the service.

As well as the St. George’s Chapel Choir, led by director James Vivian, the service also featured music by 19-year-old cellist Sheku Kanneh-Mason, who played to the congregation while the newlyweds signed the marriage register, witnessed by Markle’s mother Doria Ragland and Prince Charles, and in the presence of the Archbishop of Canterbury and the Dean of Windsor. Kanneh-Mason rose to public attention on ITV’s “Britain’s Got Talent” in 2015. Welsh soprano Elin Manahan Thomas also joined an orchestra comprising musicians from the BBC National Orchestra of Wales, the English Chamber Orchestra and the Philharmonia Orchestra, conducted by Christopher Warren-Green, who also performed at Prince William’s wedding. Princess Diana’s sister, Lady Jane Fellowes, gave a reading.

Following the British national anthem the newlyweds exited St. George’s Chapel to music from William Boyle’s “Symphony no. 1 in B-flat.”

The Kingdom Gospel Choir then performed Etta James’ “This Little Light of Mine” as Prince Harry and his new bride entered the carriage that would take them on a 25-minute carriage procession through the streets of Windsor. The procession started at Castle Hill and travelled through the main street and on to Long Walk before re-entering Windsor Castle via its Cambridge Gate.

The route was lined with 4,500 yards of Union Jack bunting. The newlyweds rode in a horse-drawn carriage accompanied by 24 mounted soldiers and two officers from Harry’s regiment, the Household Cavalry. The commanding officer, Lt. Col. James Gaselee, rode at the side of the couple’s carriage. “We are demonstrating what Britain does best in many ways to the rest of the world,” Gaselee told a newspaper interviewer before the wedding.

Following the wedding and procession was an official lunch reception for all invited guests, hosted by the queen, in St. George’s Hall. While little was known in advance about the menu, Kensington Palace confirmed that the wedding cake, created by California-born, London-based chef Claire Ptak, would be lemon elderflower with buttercream icing, decorated with fresh flowers.

A second, more exclusive evening reception for just 200 of the guests, is to take place at 7 p.m. (11 a.m. PT) at Frogmore House, half a mile south of Windsor Castle, hosted by Prince Charles. Among those not invited to the evening event was Sarah, Duchess of York, the ex-wife of Harry’s uncle, Prince Andrew. Andrew and his daughters, Princesses Beatrice and Eugenie, were invited.