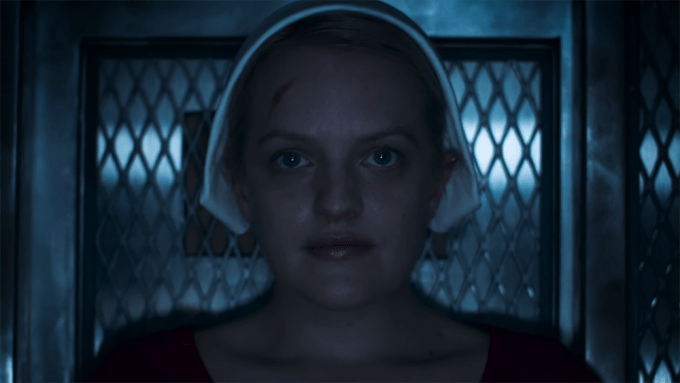 “Is this freedom looks like?” questions Elizabeth Moss’ Offred in the new trailer for Season 2 of “The Handmaid’s Tale,” released Wednesday.

“What will happen when I get out?” she continues. “There probably is no out, Gilead is within you.”

The footage then follows Offred, on the run and pregnant, while Luke, her husband from before Gilead, and her friend Moira fight for “The Resistance” in Canada. The trailer also features the Colonies for the first time, where Emily (Alexis Bledel) and Janine (Madeline Brewer) have been sent for disobeying the rules of Gilead.

“My name is June Osborne. I am free,” Moss says in the closing seconds the clip, using her real name rather than the one given to her by her commander.

“The Handmaid’s Tale,” based on the famed 1985 novel by Margaret Atwood, tells the story of a dystopian near-future in which the U.S. is rocked by civil war and women lose most of their civil rights in the Gilead state. Offred is a breeder who is forced to have sex with Gilead leaders in an effort to conceive at a time when most women have become infertile. Season 1 ends on a cliffhanger with Offred becoming pregnant and facing discipline for defying Gilead rules.

Season 2 of the show, which also stars Joseph Fiennes, Ann Dowd, Yvonne Strahovski, Max Minghella and Samira Wiley, will further explore the social and political conflicts that led to Gilead’s succession from the United States, along with Offred’s pregnancy and her attempt to escape.

The series starts streaming April 25 on Hulu. Watch the trailer above.