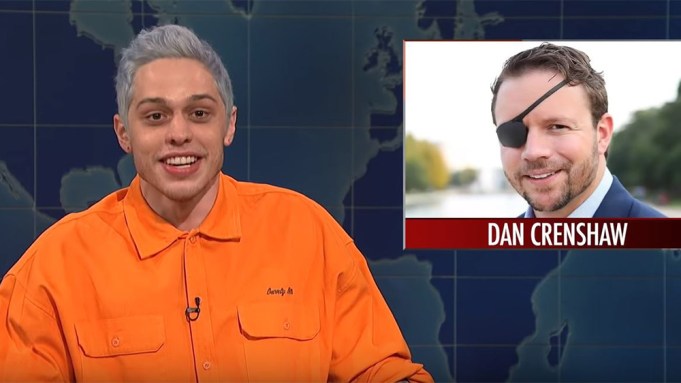 Pete Davidson has garnered some criticism after insulting a conservative politician who lost an eye during his military service on Saturday’s episode of “SNL.”

Davidson’s segment on Weekend Update kicked off with his first impressions of several midterms candidates, though he didn’t claim to be an expert on the races.

“After I had to move back in with my mom, I started paying attention to them,” he said, likely alluding to his recent split from Ariana Grande. “I realized there are some really gross people running for office this year.”

He went through Rick Scott and Peter King before arriving at Dan Crenshaw. Crenshaw, a former Navy SEAL, is running for a House seat in Texas.

Republicans took notice at Davidson’s joke and hit back on social media.

Crenshaw himself tweeted about it, writing, “I hope @nbcsnl recognizes that vets don’t deserve to see their wounds used as punchlines for bad jokes.”

Good rule in life: I try hard not to offend; I try harder not to be offended. That being said, I hope @nbcsnl recognizes that vets don’t deserve to see their wounds used as punchlines for bad jokes.

The National Republican Congressional Committee also released a statement condemning Davidson’s actions and calling for an apology from NBC.

“Getting dumped by your pop star girlfriend is no excuse for lashing out at a decorated war hero who lost his eye serving our country. Pete Davidson and NBC should immediately apologize to Dan, and to the millions of veterans and military families who tune in every weekend — because they’re not laughing.”

Newsmax co-host John Cardillo encouraged his followers to reach out to “SNL’s” sponsors to express their disapproval of Davidson’s joke.

Let them know how you feel about Pete Davidson mocking wounded warriors.

Fox News host Tammy Bruce alerted her followers that she would be discussing Davidson’s segment on Sunday’s episode of “The Five.”

This is one of the things I'll be discussing on the special live Sunday @TheFive at 5p ET tonight– "Is this comedy to you? @nbcsnl's Pete Davidson mocks GOP House candidate @DanCrenshawTX for losing his eye to an IED" https://t.co/QsTxORoxDY #JobsNotMobs

Davidson also addressed his split from Grande, who released a surprise single, “Thank U, Next,” just half an hour before “SNL” kicked off.

“I know some of you are curious about the breakup, but the truth is, it’s nobody’s business, and sometimes things just don’t work out and that’s okay. She’s a wonderful, strong person and I genuinely wish her all the happiness in the world.”