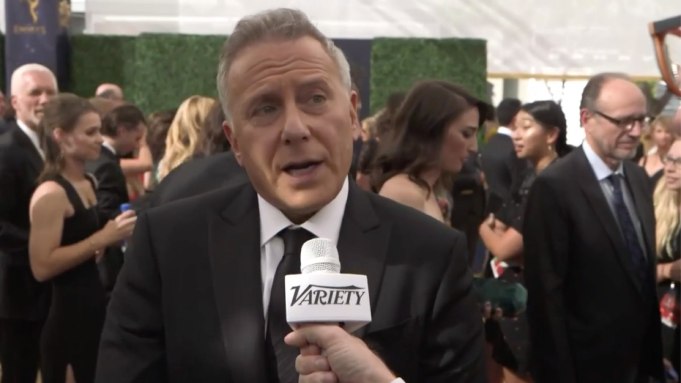 Helen Hunt and Paul Reiser are still mad about each other, because the duo met just last week to discuss the potential “Mad About You” reboot. And the former on-camera couple are all in.

During the Emmys red carpet Monday, “Mad About You” creator and star Reiser told Variety that he discussed resurrecting the popular NBC sitcom with Hunt just last Tuesday.

“For a long time we discussed never doing it, and then we said, ‘You know what, it could be actually fun.’ And we’ve kind of actually said sure,” Reiser told Marc Malkin. “And now the studio needs to figure out if they know how to do it.”

The sitcom, which aired 1992 to 1999, featured Reiser and Hunt as quirky newlyweds Paul Buchman, a documentary filmmaker, and Jamie Stemple Buchman, a public relations specialist. In its run, the comedy was an award show favorite, winning a Golden Globe, a Peabody Award, and earning nominations for five Emmy Awards for Outstanding Comedy Series. Hunt won the Emmy for Outstanding Lead Actress in a Comedy Series four years in a row. When the series ended, it left Paul and Jamie experiencing empty nest syndrome as their only daughter, Mabel, goes to college.

Reiser stayed mum on the details, but joked that 25 years later, a possible reboot will feature characters “walking slower” and exploring “Stranger Things,” which Reiser stars in as Dr. Sam Owens.

If a “Mad About You” reboot happens, it will join popular shows from the ’80s and ’90s like “Will and Grace,” “Fuller House,” and ABC’s “Roseanne” (now rebranded as “The Conners”) that have gotten the revival treatment. Hunt appeared on “Ellen” in April, where she said she has been talking with Reiser about a possible reboot and she “hopes” it can happen. It is not known if NBC will be involved yet.