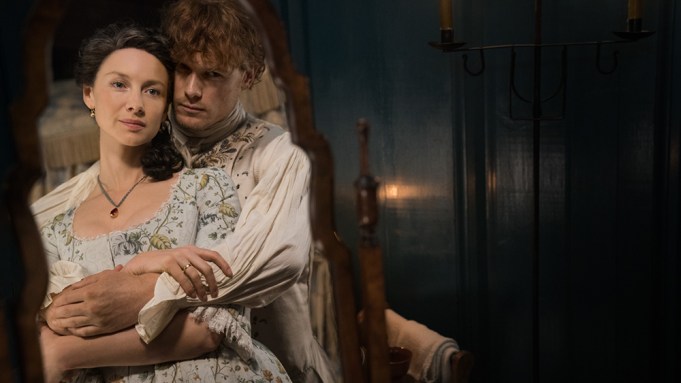 Claire (Caitriona Balfe) and Jamie (Sam Heughan) are braving the New World this November when Season 4 of “Outlander” returns to Starz.

In the teaser, the Frasers dive into making a home for themselves in North Carolina, believing that they can start anew in the Americas.

They arrive at the sprawling mansion of Jamie’s Aunt Jocasta, played by Maria Doyle Kennedy, who warmly welcomes them to “River Run.”

But, as this is “Outlander,” danger is never far behind the couple, as a mob is seen descending on “River Run” and the pair are warned that “travelers in these woods are thieves and outlaws.”

As the series has traveled from Scotland to Paris to Jamaica and more, Season 4 promises interactions with Native Americans now that the Frasers have settled in colonial North Carolina. Claire also finds evidence of another possible time traveler like herself, a skull with silver filling in its teeth–“something that won’t be invented for another 100 years.” She wonders if it is indeed a warning from the future.

It would not be an “Outlander” clip without the promise of a steamy love scene or two between “Red Jamie” and his favorite Sassenach, who by the video’s end, declare their trust for one another in the face of this new adventure.

Season 4 will include 13 episodes based on “Drums of Autumn,” the fourth of eight books in Diana Gabaldon’s “Outlander” series. The Starz hit also been renewed for two more seasons, which will be 12 episodes each.