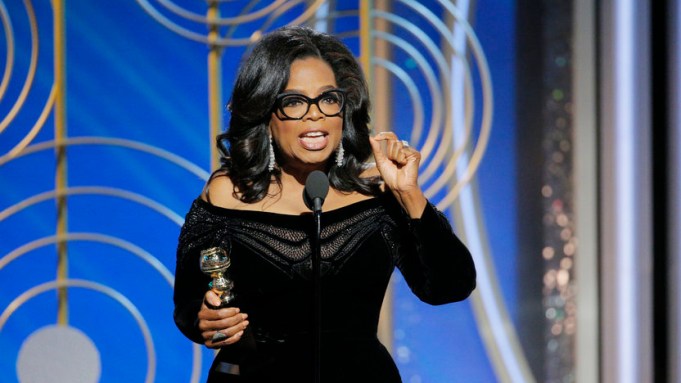 Oprah Winfrey caused watery eyes throughout the Golden Globes on Sunday night as she accepted the Cecil B. DeMille Award, giving a passionate speech about race and the #MeToo movement.

Winfrey opened the speech by remembering seeing Sydney Poitier become the first black man to win an Oscar in 1964 for “Lilies of the Field” as she was a little girl, sitting on her mother’s floor. “Up on the stage came the most elegant man I had ever seen,” she recalled. “I had never seen a black man recognized like that before. What a moment like that means to a little girl, a kid watching from the cheap seats, as my mom came through the door, bone-tired from cleaning other peoples’ houses.”

“There are some little girls watching as I become the first black woman to be given this award,” she went on.

The media mogul also paid tribute to Recy Taylor, a black woman who in 1944 was raped by six white men. She sought justice, however, with the help of Rosa Parks, and died just recently on Dec. 28. “For too long, women have not been heard or believed if they dared to speak their truth to the power to those men, but their time is up. Their time is up!”

“I just hope that Recy Taylor died knowing …her truth, even now, goes marching on,” she said as she moved on to speak of the #MeToo movement.

“What I know for sure is that speaking your truth is the most powerful tool we all have,” she said. “I’m especially proud and inspired by all the women who have felt strong enough, and empowered enough to speak up and share their personal stories. Each of us in this room are celebrated because of the stories we tell and this year we became the stories. It’s one that transcends and culture, geography politics or workplace.”

Reese Witherspoon, her “A Wrinkle in Time” co-star, introduced Winfrey and a clipshow that celebrated her accomplishments, from her talk-show to starting her own network to breaking into film.

The highly esteemed award is given annually to someone who has made an outsized impact on entertainment. Past recipients include Steven Spielberg, Jodie Foster, Lucille Ball, Robert De Niro — and last year, Meryl Streep, whose speech became a rallying cry.

Streep delivered a fiery speech that went viral, as the legendary actress slammed President Trump without actually naming him. “Disrespect invites disrespect; violence invites violence,” she said. “When the powerful use their position to bully others, we all lose.” The most nominated actor ever at the Globes, Streep boasts 31 nominations, including one this year for her role as Katharine Graham in “The Post.”

Winfrey earned her own Golden Globe nomination in 1985, for “The Color Purple,” which also marked her acting debut. Next up is Disney’s “A Wrinkle in Time,” directed by her frequent collaborator Ava DuVernay, due in March.

The multi-hyphenate received the Bob Hope Humanitarian Award from the Television Academy in 2002 and the presidential medal of freedom in 2013. A committed philanthropist, she created the Oprah Winfrey Leadership Academy for Girls in South Africa ten years ago, to further the education of girls from disadvantaged backgrounds.