Nicole Kidman Speaks Out Against Abuse in Golden Globes Speech 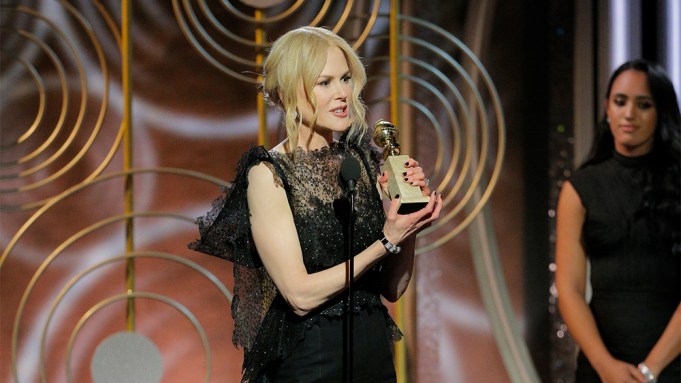 Nicole Kidman won best actress in a limited series at the Golden Globes for her work as Celeste in HBO’s “Big Little Lies.”

The Oscar-winner thanked her female co-stars during her speech, praising the “power of women,” and also took the opportunity to speak out against a subject extremely close to her character: abuse.

“This character that I played represents something that is the center of our conversation right now: abuse. I do believe and I hope that we can elicit change through the stories we tell and the way we tell them.”

In calling out her co-stars Reese Witherspoon, Zoe Kravitz, Laura Dern, and Shailene Woodley, Kidman said, “Reese, Zoe, Laura, Shailene — we pledged allegiance to each other, and this is ours to share.”

In addition to her husband, Keith Urban, Kidman also thanked her mother. “My momma was an advocate for the women’s movement when I was growing up, and because of her I’m standing here. My achievements are her achievements.”

Kidman triumphed in a starry heat that included Witherspoon for “Big Little Lies,” Jessica Lange and Susan Sarandon for FX’s “Feud: Bette and Joan,” and Jessica Biel for USA Network’s “The Sinner.”

The Globe joins the Emmy Award that Kidman collected in September for her unflinching portrayal of an affluent and educated woman coming to grips with the reality of living in an abusive marriage in HBO’s much-praised ensemble drama. Kidman and her co-star (and fellow nominee) Reese Witherspoon were also among the producers of “Big Little Lies.”

The win marks Kidman’s fourth career Globe win. She last took home a trophy from the Globes for 2002’s “The Hours.”