Comedy Dream Team Plays With History in New Netflix Kids & Family Series ‘The Who Was? Show’ 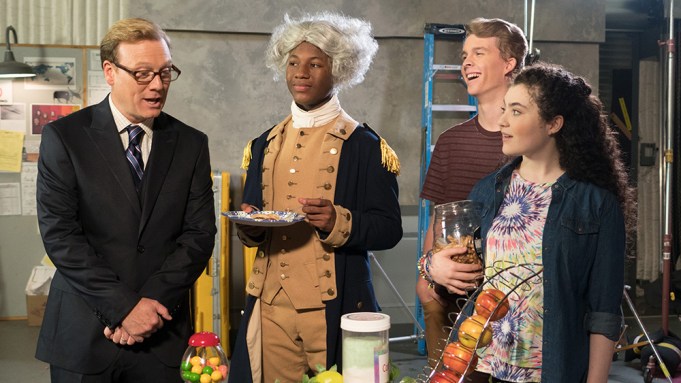 Ever wonder what it would be like if Gandhi met up with Benjamin Franklin? Or if Galileo sat down for a chat with Queen Elizabeth? What about a dance-off between Joan of Arc and Albert Einstein?

All those things and more can be found on Netflix’s new kids and family series “The Who Was? Show,” which launched on the streaming service on Friday.

The sketch comedy series is based on the popular “Who Was?” children’s books published by Penguin Random House and features a who’s who of comedy producers and writers who can boast 900 Emmys between them, according to executive producer-showrunner Richard Korson (“Great Minds With Dan Harmon,” “The Daily Show”) and writer-executive producer Brian McCann (“Conan”), who recently chatted with Variety about the silly, yet slyly educational show.

The series is a show-within-a-show format about a group of kids that produce a show overseen by a clueless network executive, played by Andy Daly. Each episode, jam-packed with improv, music videos, and animation, features an array of sketches built around an unlikely pair of historical figures. The kids are played by Haley Tju, Lilla Crawford, Bentley Green, Adam Hochstetter, Zach Timson, and Kirrilee Berger, and special guests include Ellie Kemper, John Oliver, and Jane Krakowski.

The sketch comedy idea came about after Penguin and Fremantle approached Korson about turning the books into a TV series. “They wanted to look outside of their regular sort of kids world,” he says. “They asked me to take a look at it, see what I thought. I saw the potential for turning it into a sketch format, and the ball started rolling. Netflix was super supportive of turning it into something with more of a late-night sensibility, with the sketches having a bit of an edge and satire baked into it.”

That’s when the the writing/producing dream team started coming together. “It was fun to start scouring our writer friends to see who wanted to play with it,” Korson says. In addition to McCann, the writers are Elliott Kalan (“The Daily Show”), Eric Gilliland (“Roseanne”), Delaney Yeager (“The Daily Show”), and Brian Clark (“Mutt & Stuff”). The other executive producers are Bob Higgins (“Danger Mouse,” “The Ricky Gervais Show”) for Boat Rocker, Jay Peterson (“Lip Sync Battle”) for Matador Content, and Francesco Sedita with Penguin Workshop.

The series takes inspiration from a particular classic sketch comedy series that appealed to children and adults alike. “The original ‘Muppet Show’ was structured where there’d be the behind-the-scenes sort of activity and then there’d be a show happening,” explains McCann. “Special guests would stop by, but instead of Elton John, [in ‘The Who Was? Show’], it would be Gandhi and Ben Franklin stopping by and doing some sketches, but you’d also see them backstage talking with Andy Daly and the cast.”

The books are structured to focus on a single historical figure, but the “Who Was? Show” team came up with the unique conceit of pairing people in each episode that might not, on the surface, seem like a good match. “We looked at two people and then tried to figure out the best way to tell their stories through all these different formats,” says McCann. By the end of the episode, a connection between the two figures will be made. “The first episode is Gandhi and Franklin. And what you find out by the end of the show is that you can liberate yourself through the Revolutionary War, which Ben Franklin was a big part of, or a non-violent protest, which was how Gandhi was able to liberate his country,” he explains.

The guest stars for this first season of 13 episodes get to interact with the famous folk from the past in a number of ways. In one episode, billionaire entrepreneur Mark Cuban takes part in a “Shark Tank” parody. In another, Caesar takes over John Oliver’s “Last Week Tonight” show “because he’s a great conquerer, so he decided to conquer modern television,” says Korson. “Unbreakable Kimmy Schmidt” star Kemper gets to do the show’s narration instead of H. Jon Benjamin, Bob of “Bob’s Burgers,” because Amelia Earhart didn’t think Benjamin should narrate her show. All in all, the series is a place where the writers’ and producers’ friends can come and play.

“We’ve figured out how to write sketches and bits so that our friends and people we love in comedy can come in and play with us,” says Korson.

The writers’ room for “The Who Was? Show” is a happy room, Korson and McCann say. “The writing staff area was a really joyful place where we got to celebrate these incredible disruptors and these people that pushed up against the establishment and somehow broke through even though everything was stacked up against them,” says McCann.

The show uses the books as a sturdy basis of historical fact and take off from there. “[The books] are really well-conceived in that they do a quick summary of the person so you get grounded, as a kid reader,” explains McCann. “We incorporate that into every show, where we give enough information to ground the viewer.”

“Every single sketch, every single song, everything is really taken from these stories,” says Korson. “It’s pretty fun in that way. Like, we didn’t just take liberties. We didn’t just say, ‘George Washington would be funny if he was on a Ferris wheel.’”

And it’s not all history. The team does build in a little modern commentary into the shows. “Like Susan B. Anthony fighting for women’s rights. We were able to tie that a little bit to what’s going on today,” explains McCann. “And Marie Curie. We sort of looked at her as like this super nerd that would be wildly popular today because she wasn’t allowed to go to school, but she ended up winning two Nobel prizes, so we elevated her to action movie hero.”

“The Who Was? Show” does appear to have a common theme. “Almost every single person that we featured came up against so many brick walls of people telling them that they would be failures and that what they were pursuing was a waste of time, whether it was the church or academia or because of their gender,” says Korson. “It was very interesting to me that every single one of these people went with their gut, went with what was in their heart, what they felt they had to do, and ended up changing the world. And now being featured on this crazy sketch show.”